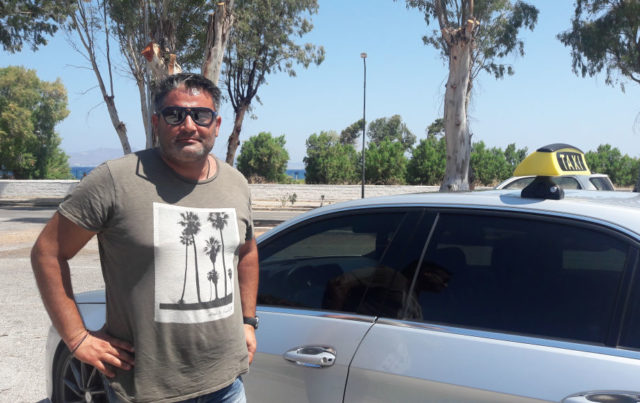 Fri. Karagiannis (President of Taxi Kos): modernization is needed in the means of transport of Kos to better serve the public

According to the president of Kos taxis, Mr. Frantzis Karagiannis, the traffic in the taxi sector is quite high since July. In his statements to “BtK” he spoke about the numb start of the tourist season, the comprehensive package of services offered by the island’s fleet to customers and the reasons why many times the taxis of Kos cannot serve all the volume of customers at the full season.

The engines were turned on in July

“Traffic picked up substantially in the first ten days of July. Until then, traffic was sluggish and there was a lot of uncertainty among professional drivers as there was no clear tourist picture for the coming months. Suddenly the flow of business started and at the moment we can say that it is clearly better than last year.”

The president of the taxis with great pride spoke about the modernization of the industry, the fleet of kos airport taxi, the colleagues , the services offered and that every year are improved.

“We are particularly proud of the owners and drivers of taxis in Kos. The level is very high compared to other regions and for this reason, unions from other cities consult us.

Our fleet is ultra-modern with new cars mostly Mercedes. The drivers are noted for their service and courteous attitude. We use whatever is new in terms of technology. The call from hotels, restaurants, the marina and other businesses is done electronically and not by phone. Soon we will extend the electronic appointment to individuals as well. We have a very elevated level of service and customers appreciate that.

In addition since 2012 we have set up a company where we have 5 mini-vans to serve even more customers. So Kos taxis at the moment have a comprehensive package of services at a high level and we would like to see other tourism sectors on our island having such amenities and services for the customer’s convenience.”

The modernisation of Kos public transport is necessary for better service

Mr. Karagiannis in our question about whether taxis can serve the volume of work without delays explained that at the moment the island’s transport work cannot be served for the most part by taxis and there is a need to strengthen the means of transport.

“With the number of tourists currently on the island is one way to expand the routes of each transport such as urban and intercity buses to meet all the transport needs that are increased in the heart of summer.

At this point, which is also very critical for our island and the image of Kos, the routes serving the airport and the urban transport routes in the town should be strengthened.

Sometimes the demand is such that there are delays in the means of transport or there is no space, so tourists turn to taxis, with the result that calls increase and these delays occur.

This summer is also unpredictable, but if we strengthen the routes of transport means, modernization of services, in time will meet the needs of the transport project of Kos.

Barcelona – a European innovation hub with a future