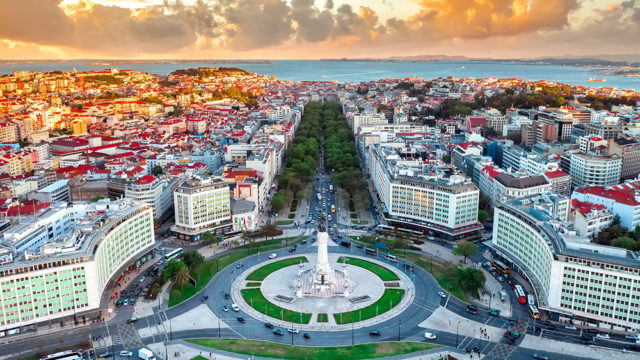 The freedom of the open road greets me as soon as I pick up a rental automobile in Faro.

Portugal has a diverse range of landscapes, ranging from the rocky-cliffed, sandy-beached, and balmy-watered coastal characteristics of the Algarve to the towering snow-capped mountains of the Serra da Estrela, despite its modest size. Then there are the Alentejo’s huge rolling plains and the Portuguese interior, with countless miles of pin-straight highways slicing through golden, sun-parched vistas that shimmer in the heat haze. In these regions, it’s common to see temperatures of 40 degrees or more.

The Alentejo’s rich lowlands are ideal for developing abundant vineyards and large olive groves. These estates are frequently carefully guarded by gleaming, whitewashed villages placed imposingly on the crests of the hills, such as Castelo de Vide. These high villages were originally historic fortresses, erected on such vantage heights to aid in the protection of such valuable land.

The Douro Valley, if Portugal had a garden, would it not be it? A tiered garden with vineyards provides some very interesting sights. As the vine fruit progressively ripens beneath gin clear summer skies, the terraces form strange patterns as they climb slowly up luxuriant slope.

The Douro area is ready for us to visit and experience traditional vinho do Porto as well as some of Portugal’s most famous wines. Wines painstakingly made in picture-postcard Quintas with views of the winding river valley below.

The life-giving rivers of the Douro slowly meander towards the historic city of Porto and eventually out to sea, offering a strange and magnificent background to this bustling working environment that produces great, sustainable products in time-honed form.

When touring Portugal, it’s usually a good idea to take it slow and stop off here and there to break up lengthy travels and see a bit of what each region has to offer. As I go about, I rarely appear to have a clear itinerary. It’s become a ritual of “wherever I lay my hat.”

Between the Algarve and Lisbon, there is a lot of country to see on the way north, but the wide plains of southern Portugal ultimately give way to a more urban picture as the sprawling city comes into view.
With the vineyards and cattle farms of rural Portugal fading from view, crossing Ponte 25 de Abril to see the busy cityscapes of Lisbon is a treat. The picturesque green town of Sintra, with its sun-dappled ancient center and bustling tourist paths, will soon come into focus after only 18 kilometers.

I frequently start a trip to what is known as the “Portuguese Riviera” from Sintra. I can’t think of a better place to start.

When I visit Sintra, I prefer to beat the crowds and get there early. That way, you’ll have a better chance of locating a safe parking spot. This famous tourist destination may get quite crowded. Once parked, all I have to do is sit back and watch the town slowly come to life.

My first stop in Sintra is a tiny café and pastelaria directly across from the quaint train station. This is a great place to sit and have a BICA and a freshly baked pastel de nata in the morning. All of this happened as I was meticulously people-watching, also known as being insufferably inquisitive.

With frequent trains arriving from Lisbon and transporting many tourists from all over the world, Sintra’s railway station is a hive of activity. Every race and faith is represented as passengers disembark from crowded trains, many of whom promptly board fleets of waiting coaches that will transport them from Sintra to Cabo de Roca, Europe’s westernmost point. Between them and the United States of America is the wide expanse of the open Atlantic beyond Cabo de Roca. New York City is located just west of here.

Sintra is a town with beautiful gardens, huge palaces, and fine architecture. These genuinely gorgeous locations are as royal as any other in Europe. But it is the brilliantly painted Palacio de Pena, located high on a beautiful tree-clad slope, that reigns supreme over them all (part of the Sintra Mountains). It is a perfect example of a Romanticist castle from the nineteenth century, and it is still in use today, holding major Portuguese State events. Here is a genuine example of one of Portugal’s Seven Wonders, as well as another UNESCO World Heritage Site.

It’s time for me to leave Sintra once the masses of visitors come and the tuk-tuks and lisbon airport taxi start buzzing about. I take the road that is basically the same as the Sintra tram route (Electrico de Sintra). This tramway connects Sintra with Praia das Maçs, a beautiful beach town approximately eight miles to the west. The tramway was created in the 1930s to connect Sintra and the resort, and it was used to transport both people and freight, significantly benefiting the coastal village by connecting it to Sintra’s main railway station.

The River Colares formerly passed past several orchards, according to legend, giving Praia das Maçs its name (Beach of the Apples). Some of the falling apples were washed downstream to the estuary, where they finally washed up on the sandy beach, giving it its odd name.

What a beach, too! An large sandy bay with a variety of fashionable beach bars where visitors may pass away the warm evenings in Portugal. With a glass of cider in hand, perhaps? Perhaps a suitable tribute to the famous apples of Praia das Maçs.

The tramway goes past lovely towns on its route to Praia das Maçs, where there are often artisan fairs set up in the plentiful shade of gently swinging trees that flutter softly in the mild breeze. The stallholders are mostly locals who come to sell a variety of handmade products, handicrafts, and a few antiques near the babbling Colares River. Along this route (N247), there are a lot of these somewhat surprising tiny establishments where travelers may stop for a leisurely look.

As it travels from Praia das Maçs and the surfing destination of Praia Grande to Cascais, the route bends and turns. Cabo da Roca, with its wild surf, towering cliffs, and required lighthouse, is a must-see along this trip. It reminds me of Cabo St Vicente near Sagres, both popular destinations where people flock to see Portugal’s renowned sunsets. The route then follows the rugged, exposed Atlantic coastline until it reaches Cascais, an obviously wealthy and stylish town.

However, the sun has set on another another of our Portuguese delicacies. Cascais and the Estrada Marginal, which leads back to Lisbon, are a different story. Perhaps one to save for a later date?

Once “Europe’s busiest airport”, London Heathrow has slipped to tenth place in Europe