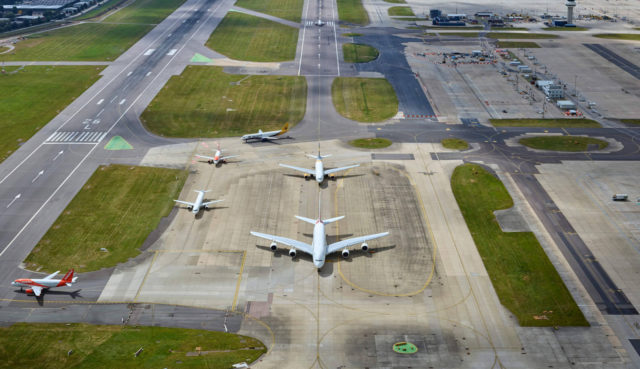 While air traffic has remained curtailed in most of the world over the summer season, taxiing times at airports have not – for the most part – shifted significantly since before the pandemic. Every six months, Eurocontrol releases statistics over just how long it takes to get from the gate to the runway at airports all over the world. Follow along to see which ones top the list.

If you have ever landed at or taken off from Schiphol’s Polderbaan runway, you know that the taxi adds an additional 15 minutes or so to your overall flight time. The runway is the Amsterdam hub’s sixth and is located five kilometers away from the main terminal building. As a result, Polderbaan even has its own control tower.

When measuring taxi times, more things than the distance to the runway impact the result. Cues often form with lines of aircraft awaiting their turn for take-off for various reasons. This phenomenon might be absent at airports such as Oslo Gardemoen or, say, Bradley International. However, taxi times add up in busier locations despite the runway being nowhere near as far away from the terminal as Schiphol’s Polderbaan.

Still not back ‘to normal’

The European Organisation for the Safety of Air Navigation, commonly known as Eurocontrol, publishes statistics over taxi in and taxi-out times in airports across the world twice per year – once for each IATA season. When looking at the data for AMS – Amsterdam Schiphol – it is nowhere near other airports across the globe when it comes to reaching the runway. Despite the Polderbaan trek, passengers departing Amsterdam can currently expect to spend on average 12.7 minutes taxiing from the gate.

Before we dive into the figures, we should mention that when comparing them to data from the winter season of 2019/2020, nearly all numbers drop across the board. However, rankings remain similar. Meanwhile, the current number one airport used to be number two (although when corrected for the drop in traffic in the first few months of 2020, we may have found it would have claimed first). In order not to spoil the statistic fun, we’ll reveal the previous order at the end of the article.

Shanghai is currently on top

At the top of the lengthiest taxi times sits Chinese airports serving the megapolises of Beijing and Shanghai. The latter’s Pudong, PVG, takes the cake with a whopping 26.4 minutes on average. That is close to an extra half hour waiting for the plane to get its turn on one of the airport’s four operational runways. Beijing Capital International Airport (PEK) is not far behind. Taxing out there will add, on average, 21.6 minutes to the journey.

However, closer to Shanghai Pudong is Mexico City. Benito Juárez International Airport (MEX)is one of the highest in the world at an elevation of elevation 7,342 feet (2,238. meters) above sea level. It also has the current second-longest taxi-out time of any airport in the world, clocking in at 25.4 minutes on average.

Twenty minutes and more in the Americas

There are a few more airports where the time between the gate and take-off goes above the 20-minute mark. Almost all of them can be found in the Americas. Bogotá International (BOG) in Colombia comes in at 21.8 minutes. Meanwhile, Chile’s Santiago Airport (SCL), or Comodoro Arturo Merino Benítez International Airport as is its full name, adds an average of 20.9 minutes to taxiing. SCL also has two runways.

Heading further north, New York JFK with four runways grabs the top spot in the US. The Queens airport has an average taxi-out time of 22.8 minutes. This puts it higher on the list than Newark (EWR), which comes in a modest, in comparison, 18.8 minutes. However, Philadelphia (PHL) is not far behind at 22.5. Washington Dulles International Airport (IAD) comes in a close third, with an average of 21.9 minutes.

Meanwhile, Chicago O’Hare (ORD) is also in the above-20 club, with an average of 21.6 minutes. O’Hare shares the fourth spot in the US with Charlotte Douglas International (CLT). Right behind them is San Francisco (SFO) with 21.1, Miami International (MIA) at 20.8, Dallas-Fort Worth (DFW) at 19.7, Houston’s George Bush (IAH) at 18.9, and Denver International (DEN) at 18,8 minutes. Atlanta’s Hartsfield-Jackson (ATL) and Los Angeles International (LAX) both come in at 17.2.

Pivoting back to Asia, we find a few more heavy-hitters. Taxiing out from one of Delhi Indira Gandhi International Airport’s (DEL) three terminals to one of its two runways takes on average 20.9 minutes. Meanwhile, the same procedure in Bangalore (BLR) takes 18.6 minutes, and at Mumbai International Airport (BOM) 16.9. Mumbai shares the figures with both Kuala Lumpur (KUL) and Singapore Changi (SIN). However, Manila (MNL) clocks in at 19.2.

Taxiing at Tokyo Haneda (HAN) is also not done in a flash – it takes an average of 19.8 minutes. At Narita (NRT), the figure is down to 17.2, although this is perhaps not enough to warrant picking one over the other when traveling out of Tokyo. Seoul Incheon (INC) is nearly as efficient as Narita, at 17.1, whereas the average taxiing out time in Hong Kong is 17.9 minutes.

The Middle East and Europe

One would imagine that the busiest airports in Europe would have figures similar to those across the globe. However, at least during the past summer season, Paris Charles de Gaulle (CGD) saw average taxiing times of 14.7 minutes, and Frankfurt only 12.6. Figures were not much higher pre-pandemic.

Africa has only one airport where taxiing takes over 17 minutes, and that is Brazzaville’s Maya–Maya Airport (BZV). Johannesburg airport OR Tambo International Airport, the busiest on the continent, sits at 16.7 minutes. Nigeria’s two main airports in Abuja (ABV) and Lagos (LOS) come in at 16.5 and 16.3, whereas taxiing out at Addis Ababa (ADD) in Ethiopia takes on average 16.4 minutes.

Taxi times are not just a matter of passenger comfort. Longer time between the gate and take-off also adds significantly to an airline’s fuel consumption. This increases both the financial burden and environmental impact.

During the winter season of 2019/2020, taxiing times were on average higher. Then, Delhi topped the list with just over 28 minutes, while Shanghai sat at 26.3. Meanwhile, all major Canadian airports were over 20 minutes, with Montreal reaching 25.8.

As traffic will begin to pick up following the crisis and lessened capacity, airports would do well to see if there are means of increasing operational efficiency and thus lowering overall fuel consumption.