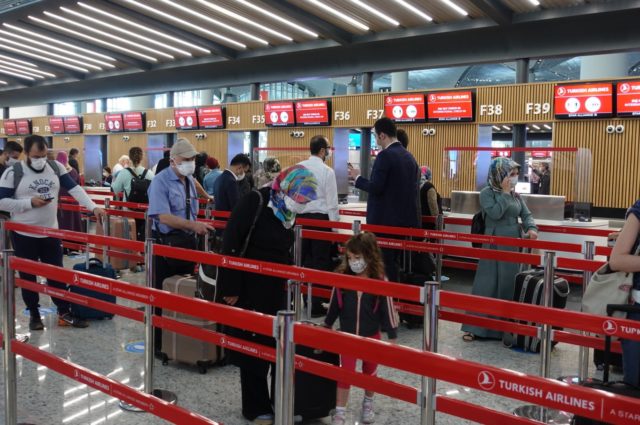 The number of passengers traveling from Istanbul’s airports in the first 11 months of the year increased by 49% compared to the same period of 2020.

Turkish civil aviation, which has overcome the negative impact of the COVID-19 pandemic, has started to gain momentum again in terms of flight frequency and passenger density.

There was a significant increase in passenger and flight statistics at Istanbul Airport – the city’s mega airport on the European side – as well as Sabiha Gökçen Airport on the Anatolian side and Atatürk Airport, which closed to passenger traffic in 2021, compared to the previous year.

A total of 33.261 million passengers flew from Istanbul Airport in January-November, according to the data of the General Directorate of State Airports Authority (DHMI). Of the passengers passing through the airport, 9.635 million preferred domestic destinations and 23.626 million flew onward to points abroad.

Atatürk Airport started to host only private and cargo flights after the services at the airport moved to the Istanbul Airport back in April 2019.

A total of 56.20 million passengers – 24.621 million on domestic flights and 31.398 million on international flights – passed through Istanbul’s airports.

In the same period of last year, the number of passengers hosted at Istanbul airports was recorded as 37.511 million.

A total of 251,647 flights were made at Istanbul Airport between January and November of this year. Of those flights, 72,813 were domestic and 178,834 were international.

In the first 11 months of this year, 37,780 flights were carried out from Atatürk Airport. Some 12,395 of the flights from the airport were made to domestic destinations, while 25,385 were bound to international destinations.