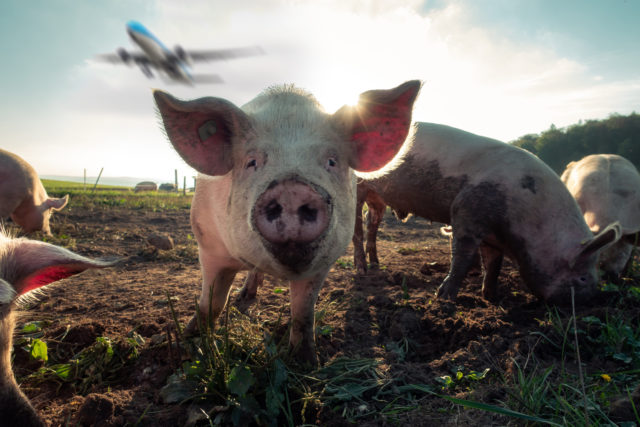 Pigs have been recruited at Schiphol Airport in Amsterdam, the Netherlands, to keep birds – mainly geese – that pose a safety risk to planes away from the runways.

A total of 20 pigs make up the “patrol team” in fields suitable for grazing between the runways and clean up the debris from the harvest of sugar beet, a favourite food for the geese.

Amsterdam airport is located at an altitude below sea level, which makes the soil fertile and thus attracts birds looking for food and a place to nest.

But it also means that the airport authorities are engaged in a constant battle to keep the runways “clear” of unwanted, and potentially dangerous to the safety of aircraft, bird presence.

Last year, according to the BBC, 150 cases of aircraft hitting birds at this airport were recorded.

But how much does the ‘pig patrol’ pay off? In the few weeks since their recruitment, no birds have been seen in the fields beside the runways, officials say.

One question, of course, is how the pigs are reacting now that they are so close to the runways.

“They have at their disposal areas equal to four football fields, they have the same houses, the same water supply system, they feed in the same way, so everything is very normal,” says the farmer in charge of the pigs.