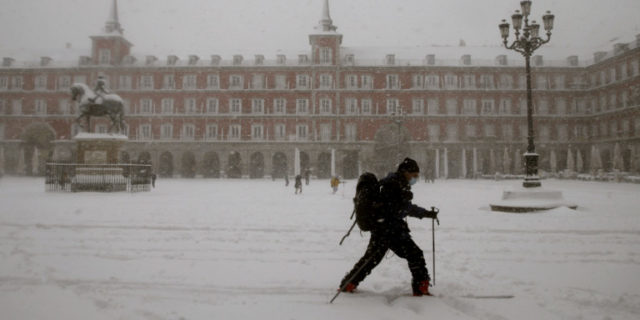 Soldiers today rescued drivers trapped in their vehicles as heavy snowfall from Hurricane Filomena wreaked havoc on traffic across Spain.

Madrid airport remained closed, but the worst is expected, as another 20 cm of snow is forecast for today. However, there are three dead. “Although the weather is extremely difficult and the number of incidents is relatively limited, we are mourning the death of three people,” said Minister Fernando Grande-Marlaska, without elaborating.

A woman has been killed after being trapped in her car when a river overflowed near Malaga in southern Spain. A homeless man has died from the cold in the eastern Spanish city of Calatagiud.

“Due to the snowfall forecast and security reasons, Madrid Barajas Airport will be closed all day on Saturday,” Aena, the company that controls the Spanish airports, announced on Twitter. The airport closed yesterday, Friday night, after a blizzard made flights impossible. At least 50 flights to Madrid, Malaga, Tenerife and Ceuta, Spanish territory in North Africa, have been canceled, Aena said.

Soldiers struggled to reach drivers whose vehicles remained stationary for hours on the streets around Madrid. “We are continuing rescue operations on the A4, A5, M40 and M607 motorways,” the Military Emergency Unit, which deployed 147 troops, said on Twitter.

Heavy snowfall from Hurricane Filomena caused chaos in travel throughout Spain.
High-speed rail services between Madrid and the southeastern cities of Alicante and Valencia have been suspended, as have bus services in Madrid, the city council announced today.

Madrid and four other regions are currently on red alert as heavy snowfall is forecast to continue, the State Meteorological Service said, adding that another 20cm of snow is expected to fall today in Madrid and in the center of the country. Madrid City Council called on residents to stay in their homes.