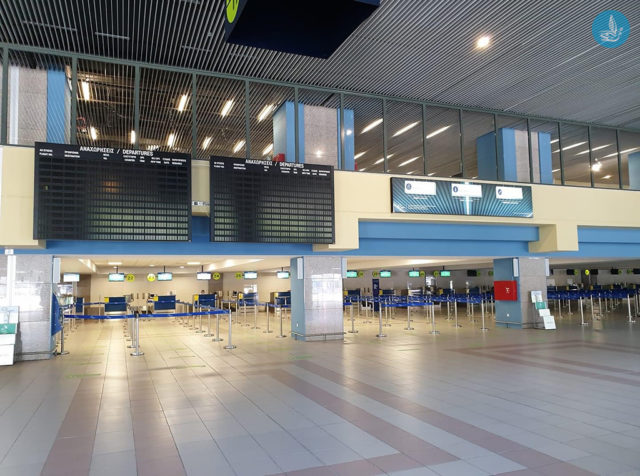 In addition to the projects planned in Athens and Paros, necessary upgrades, extensions and modernization of infrastructure are proposed at eight airports in the Region.

Given that Greek tourism in 2020 lost almost 80% of revenue in 2019, tourism operators are already planning for the next day putting in the foreground investments in infrastructure, with emphasis on Greek airports, from now on that almost 7 out of 10 tourists come to the country by air.

The members of the Association of Greek Tourist Enterprises set their proposals – priorities for the necessary upgrades, extensions and modernization of infrastructure at eight airports in the Region, in addition to the projects planned in two more, that of Athens and Paros. Exactly these proposals are included in the study on “Investments in public infrastructure to improve the competitiveness of the tourism sector”, where, among other things, it is stated that “the recovery of tourism after the pandemic at 2019 levels is expected to take place in a short time 3 or 4 years old in a highly competitive environment. “In the medium term, therefore, both Greek tourism and its main competitors will seek to maximize their share of a shrinking market.”

In detail, regarding the proposals in eight main airports of the country from Evros to Crete, they concern from simple to more complex projects:

The first proposal concerns the creation of a gas station at Alexandroupolis airport, for which, as it is pointed out, “the implementation process of the project is simple, so it depends on the competent body”.

For Anchialos Airport in Volos, the connection of the airport with additional airports of main markets is considered a key issue, being a direct gateway to Thessaly and especially to Pelion, Volos and the Sporades.

For the new airport of Kastelli in Heraklion, as it is pointed out, based on the estimates by the members of SETE, “it will create new data in the tourism of Eastern Crete, positive if the various critical parameters of its operation are studied in depth, such as fees that will be charged. the ticket, traveler access and fuel handling. The study of Kastelli airport is a project under study for many decades, the project officially started in February 2020 and in the first phase the studies will be completed and some necessary work will be done in the area in order to start the construction in 2021 “.

However, for the existing airport Nikos Kazantzakis in Heraklion, it is proposed the “complete renovation of the existing heraklion airport to properly serve the millions of visitors to Crete until the completion of the new airport in Kastelli”. The project, as mentioned, will increase the passenger service capacity for Crete and will significantly improve the services offered to all passengers.

Another proposal, the fifth in a row, has to do with the air traffic control systems of Chania airport and Andravida: According to SETE, the installation of modern air traffic systems is required to ensure the air traffic management of the control areas of Chania and Andravida airports which controls the air traffic of Zakynthos and Kefalonia airports. This will help increase the number of Slots with the immediate effect of improving air access to these extremely important tourist destinations. According to recent information, the CAA has finally given its approval for Fraport, which is financing the project, to proceed with the procurement of the systems. Fraport immediately started the required control procedures of the specifications given to it, in order to prepare and implement the tender for the supply of the systems.

As for the Araxos airport in Achaia, it needs to be upgraded both in terms of infrastructure (reception and waiting rooms) and services (Duty Free and café etc). “The airport operates on a seasonal basis so there is time to plan and execute work,” says the Insete study.

The extensions in Naxos, Chios

Of particular interest is the proposal for the extension of Naxos Airport, with the extension of a runway from 900 m to 1200 m and aircraft parking areas, the improvement of hydraulic protection works (drainage – sewerage works), access works as well as fencing . “There are studies with deficiencies and without Permits for the Approval of Environmental Terms (AEPO). There is also a request from the airport management for the completion of the implementation studies, while the available money for the project can be covered by the package of regional airports. “YPOMEDI (Ministry of Infrastructure, Transport & Networks) must approve the proposals of the airport management for the maturation of the project”, states Insete.

“In January 2020, the announcement of the real estate expropriations for the expansion of the runway – take-offs of Naxos airport and the construction of new facilities to support the operation of the airport was published in the Government Gazette. This issue was a chronic obstacle to the development of the development project. The CAA plans to extend the length of the corridor to 1,200 m and to construct a corridor safety zone (Runway End Safety Area, RESA) on both sides, to also build two new treadmills, to expand the maneuvering field by 8,000 t. ?. and the station building by an additional 2,100 sq.m. The implementing body of the project is the Civil Aviation Service, while the total cost can amount to 5 million euros “.

The case for the expansion of Chios airport is similar, with the extension of a runway (from 1,500 m to 1,800 m), aircraft parking spaces and an airport building. “There is AEPO and a final study of the airport. A study is being prepared by the region for the modification – relocation of a coastal road for a length of 600m. The debts to the citizens for the expropriations have been repaid and there are 15 million euros available from the fund of the regional airports. The study, which is the responsibility of the Region, is delayed for the project “, reports Insete. “On the west side of Chios airport, it was re-financed by the Public Investment Program, with the amount of 1.655 million euros required for its continuation and completion. According to the relevant press releases of the municipality of Chios, its auction is scheduled for December 2020. This is an important project, as it is a basic condition for the expansion of the runway and take-off of the airport.

The important projects planned in Athens, Paros
For the airport “Eleftherios Venizelos” of Athens, and since the pandemic has dramatically affected air travel worldwide, as a result, the HRDH suspended the tender for the sale of 30% of the shares of AIA in its possession cashier’s desk. With the normalization of the situation, the process is expected to restart. The development in the plans for the expansion of the airport infrastructure was similar. The planned preparation of the necessary studies within 2020 has been temporarily suspended, with the airport administration studying the planned passenger traffic (after Covid19 season) in order to update the work schedule.

However, the AIA’s intention to achieve a zero carbon footprint by 2025 remains valid. Through the implementation of the “ROUTE 2025” program, the AIA is expected to become one of the first international airport managers to cover 100% of the needs for electricity generated at the airport through renewable sources and to reduce its direct emissions from fuel consumption. “ROUTE 2025” fully integrates environmental sustainability in the future development course of the AIA, contributing in practice to the environmental footprint of Athens as a destination, as well as to the National Plan for Energy and Climate.

The developments for the airport of Paros are important

-For the new airport and its surrounding area, the final study was approved for the construction of a new airport of approximately 13,000 sq.m. . The cost of the projects has been estimated at 37.894 million euros including VAT, while the current airport has an area of ??745sqm.

Adil Karaismailolu: Istanbul Airport is the airport with the most flights in Europe

Modernization is needed in the means of transport of Kos to better serve the...