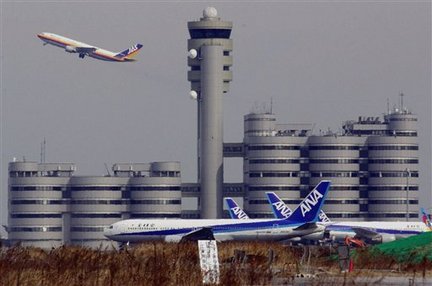 This month, Tokyo’s Haneda airport returns to scheduled international flight operations for the first time in 32 years as part of the government’s goal to turn the offshore facility into a 24-hour hub to compete with global competition and boost the economy.

Haneda had been long relegated to domestic flights when Narita International Airport opened in Chiba Prefecture in the 1970s, although Haneda is much more conveniently accessible from central Tokyo.

Experts commend the return of Haneda, or Tokyo International Airport, to international operations, and airlines see opportunity in being able to offer services closer to central Tokyo. But Haneda is not without its drawbacks, including expensive landing fees, flight path restrictions and the question of future expansion.

“The Tokyo metropolitan flight corridors are narrow and complex because of the separation of domestic and international flights depending on the airports used. Thus, it hasn’t been very convenient for customers,” said Hajime Tozaki, an economics professor at Waseda University and former Japan Airlines Corp. employee. “I think domestic and international flights will begin experiencing a more balanced flow, which will improve convenience, and (Haneda) will become more competitive as well.”

Haneda on Thursday opens a new international terminal and a fourth runway as part of a key role in national aviation policy.

The transport ministry said in May, in releasing a growth strategy, that Japan’s economic growth has been shackled by the division in which Haneda handles domestic flights and Narita international flights, gambling that the opening of a fourth runway at Haneda will provide a “chance in a million” for improvement.

Seiji Maehara, the current foreign minister, was especially vocal in his previous post as transport minister about the need for Haneda to be an actual 24-hour international hub.

The growth strategy also says both Haneda and Narita, which only has two parallel runways, have failed to keep up with rising demand for international flights focused on Tokyo.

Haneda currently has 303,000 annual arrival and departure slots, mostly daytime but with a few chartered flights at night. The fourth runway will spell an increase of 110,000, and 60,000 slots will be used for international flights.

Although officially known as Tokyo International Airport, Haneda has been predominantly handling domestic flights, except for some chartered international flights, since Narita opened in 1978.

The opening of Narita came after a long political struggle with protesting landowners, mainly farmers with leftwing supporters, who protested the airport’s very existence.

Political sensitivities have limited Narita’s hours of operations to between 6 a.m. and 11 p.m. to minimize nighttime noise. This has curtailed the expansion of flight slots despite demand from many foreign airlines. The two-hour travel time from central Tokyo to the airport has also posed a burden.

But with Haneda finally getting the green light to become Tokyo’s gateway hub, Tozaki of Waseda University said its location will make the facility much more competitive and closer to the economic power concentrated in Tokyo.

“The airport can ride on this economic power,” Tozaki said.

But Haneda does have some hurdles.

Haneda traffic is subject to restrictions because the airspace over the western part of the Tokyo area is controlled by the U.S. Yokota Air Base, situated in the suburb of Fussa, Tozaki noted. The restrictions in some cases extend flying times. Approach and departure routes to the airport in Tokyo Bay are also restricted by the need to minimize the proximity of aircraft to nearby skyscrapers, thus landings and takeoffs are generally over water.

For Haneda to become a truly competitive international hub, these restrictions must be eased, he said. Likewise, the current relegation of Haneda’s North American and European flights to late-night hours also poses an inconvenience to travelers that should be addressed.

The transport ministry plans to both expand the terminal and lift the time constraints on North American and European flights in the future.

Landing fees at Haneda are meanwhile very expensive compared with hub airports in other countries.

For a Boeing 767-300 weighing 182 tons and carrying 150 passengers, Haneda’s landing fee is calculated at ¥2,912 per passenger, whereas the equivalent fee is ¥335 at Incheon and ¥1,195 at Singapore’s Changi Airport, according to data from the transport ministry based on information from the International Air Transport Association in May.

But airlines, both foreign and domestic, have hopes for Haneda as an international hub, with 20 carriers already signed up to operate flights.

Overseas carriers, including those entering the Japanese market for the first time, are expected to intensify competition.

AirAsia X, for example, is offering ¥5,000 one-way flights from Haneda to Kuala Lumpur as part of its inaugural campaign.

All Nippon Airways Co. meanwhile hopes Haneda provides the opportunity to expand its international network. Hiroshi Shibata, director of ANA network planning, sees Haneda as “our base airport where we can use our full strength.”

“In the daytime, we will continue our solid domestic operations, which are a big part of our profit. International flights still have daytime restrictions, so we will fly to areas where we are allowed. . . . As for late at night, when planes can’t use Narita, we will fly to where there is high demand,” said Shibata, referring to Los Angeles and Hawaii.

He noted that combining both international and domestic flights at Haneda will greatly expedite transits.

“There’s no doubt that Haneda will be a hub for our management strategy,” said Eiji Takemura, a director of corporate planning at JAL, which is scheduled to have seven new international flights, including Paris, San Francisco and Singapore service.

“We’d like to target business users who want to use their time efficiently,” he said.

Some industry people are meanwhile concerned that Haneda will take away some of Narita’s business.

But Hiroshi Yamaguchi, deputy director of the transport ministry’s Haneda office, said Japan will be using both Haneda and Narita strategically.

He said Narita will still be the main international airport, while Haneda’s domestic-international hub network will be enhanced.

Indeed, Narita’s international network is still much greater than Haneda’s, as Haneda will cover 17 cities in 11 countries or regions by this winter, while Narita accounted for 97 cities in 43 countries and regions as of last summer.

In addition, under the growth plan, Narita will construct a terminal dedicated to budget carriers to differentiate it from Haneda.

“It’s not really about focusing on just either Haneda or Narita,” he said.

Cargo carried from Istanbul airports increased by 30 percent and commercial flights by 45...

This winter, Ryanair is adding 26 additional trips to Portugal.