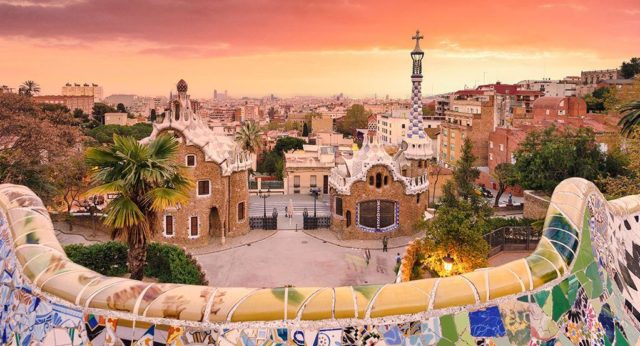 Barcelona is strategically positioned on the Iberian peninsula’s Mediterranean coast, shielded by the Serra de Collserola mountain range, bounded by two river deltas, and surrounded by excellent natural settings. This has resulted in the city’s sustained growth: it has developed into a major European metropolis that is fully interwoven with its surroundings.

Barcelona metro, which has eight lines and 161 stops and has been in operation since 1863, is a sprawling electric train network that runs largely underground, linking the city center to the suburbs and many other cities, notably L’Hospitalet and Badalona.

Even the tiniest area and the majority of Barcelona’s most prominent tourist attractions are now well connected by metro. The metro connects the Sagrada Famlia, Casa Batlló, Platja de la Barceloneta, and the Arc de Triomf, making it the most convenient and best route to go around Barcelona.

Sunday through Thursday, the metro operates from 5 a.m. to 12 a.m. It is open until 2 a.m. on Fridays, Saturdays, and the nights preceding public holidays.

Collserola is a mountain range that encircles Barcelona to the north. The FGC is required to reach the districts at the foot of the hills and beyond.

Sant Gervasi, La Bonanova, Sarrià, and Vallvidrera all have a FGC station. These neighborhoods are definitely worth visiting, particularly Sant Gervasi, which is home to some of the city’s greatest fine dining establishments.

Technically, the FGC is part of the Barcelona Metro system, although there are several significant distinctions. For instance, rather than a metro tube, the FGC consists of actual trains. Additionally, they all depart from downtown, and the ticket price varies according to the distance traveled, whereas the normal metro has a flat fare.

With over 200 routes and their own bus lane, Barcelona’s hybrid city buses can be speedier than the metro, particularly if your metro line does not link directly to a particular destination.

Additionally, keep in mind that the Barcelona Metro operates on a restricted schedule, but the city bus operates on multiple lines that operate 24 hours a day.

Learning the various routes can be hard, but Google Maps is an excellent travel companion, and each station has maps and detailed itineraries relevant to their region.

A tip for bus riders: tickets may be purchased only inside metro stations.

There are three funicular lines in Barcelona. Two of them connect to major tourist destinations such as Tibidabo, the city’s highest point and home to the church with the most spectacular views. The other leads to Montjuc, another hill on the city’s western outskirts that is home to the city’s castle.

Tickets and prices for public transportation

All types of public transit operate on the same trip card, which is available at all metro and FGC stations. Please note that all costs are for Zone 1, however the FGC operates in up to six zones, therefore various charges apply.

A single metro trip costs €2.40 (€5.15 if traveling to or from the airport), however tourists can save money by purchasing one of many integrated tickets:

T-Dia (€10.50) – 24-hour individual ticket. Appropriate for lone travelers who intend to take many metro journeys in a single day.

T-Familiar (€10) – Eight-journey multi-person travel pass. This is an excellent choice for families or groups of friends.

T-Usual (€40) – Individual travel card good for 30 days with unlimited travels. This is the ideal option for solitary travelers who want to stay in the city for an extended amount of time.

Tip for public transportation in Barcelona: all integrated tickets have the advantage of remaining valid for one journey when changing modes of transport within a 75-minute timeframe. However, if you are traveling on a single ticket, you will need to purchase another when changing from metro to bus or metro to FGC.

Barcelona’s public transportation system is one of the most accessible in Europe, with 147 metro stations (out of 161) entirely accessible to wheelchair users and 100 percent of buses equipped with an access ramp, wide doors, and reserved seating.

The municipal government is always trying to improve blind people’s access to the metro and bus systems by installing a voice navigation system and a braille metro guide at all information stations.

You can see the most recent information on accessible transportation here.

A cab in the Raval neighborhood of Barcelona. Taxis are readily available throughout the day.

Visitors seeking a higher degree of comfort can wave at any of the yellow taxis that circulate throughout Barcelona throughout the day.

Generally, fares begin at €2.10, however costs may climb at night and on weekends.

Alternatively, numerous taxi applications are available in Barcelona – the most popular of which are Hailo and MyTaxi.

Cycling is an excellent mode of transport in Barcelona.

A little more than a decade ago, you would have been hard pressed to find any bikes in Barcelona. However, in recent years, the administration has made a concerted effort to make the city more bicycle-friendly. They intend to construct additional lanes in the coming years.

Regrettably, Bicing, the public rental service, is only available to citizens and foreign residents. It is not yet open to tourists. Visitors who desire to see Barcelona by bicycle must rent one from one of the several private firms located around the city.

Taxis at Barcelona Airport do not have set prices for transfers.

The journey from Barcelona Airport (BCN) to the city center costs around €35 during the day and €42 at night.

Strolling around Barcelona’s streets – bouncing from neighborhood to neighborhood and taking in the architecture and socioeconomic differences – is one of the greatest ways to see the city.

If you stay in the Old City or anyplace else in downtown, the majority of tourist sites are within a two- or three-kilometer radius. La Barceloneta, El Raval, the Gothic Quarter, Passeig de Gràcia, and Passeig del Born are all within walking distance of the city center, which features attractions such as Barcelona Cathedral, the Museum of Contemporary Art, La Pedrera, and even a beach. All of these attractions will keep you occupied for a few days at the very least.

Nonetheless, you may choose to use the metro or another mode of transit to see Parc Güell, Casa Vicens, Montjuic, Hospital Sant Pau, or Sagrada Famlia.