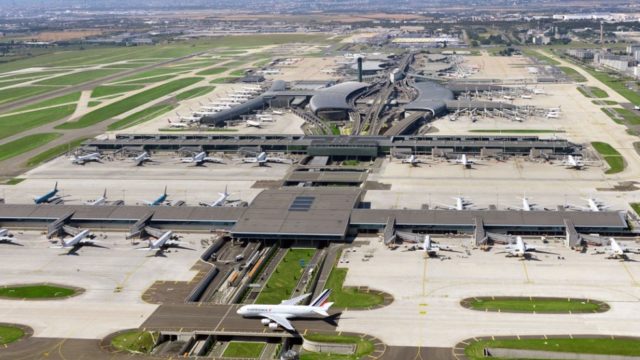 PARIS — International travelers passing through Paris faced disruptions on Tuesday because of strikes by public transport workers and air traffic controllers. But airlines said they were striving to maintain most, if not all, of their international flights to and from the French capital.

A spokesman for Aéroports de Paris, which operates the two main Paris airports of Roissy-Charles de Gaulle and Orly, said the terminals were calm and far less crowded than on a typical day, when roughly 160,000 travelers pass through their halls. Civil aviation authorities had asked airlines over the weekend to reduce their flight schedules by 30 percent at Charles de Gaulle and 50 percent at Orly airport in preparation for Tuesday’s action.

“All passengers would normally have been contacted by their airline either yesterday or the day before if their flight was going to be affected,” said a spokesman for the airport.

Air France said on its Web site that it was operating 100 percent of its intercontinental flights Tuesday, as well as roughly 80 percent of its domestic and inter-European flights from Roissy-Charles de Gaulle Airport and 50 percent from Orly. Air France passengers whose flights had been canceled were being offered, when possible, seats on flights operated by its Dutch partner airline, KLM, or other members of the SkyTeam alliance.

Still, some passengers encountered delays. At Orly on Tuesday afternoon, Marianna Aptrah, a 40-year-old doctor from Cordoba, Argentina, had just wrapped up a weeklong vacation in France with her husband and was about to miss her connecting flight from Madrid airport to Buenos Aires. Her Iberia Airlines flight from Paris to Madrid had been canceled because of the strike.

“We checked on the web this morning and our flight was still okay,” Ms. Aptrah said. “Then we get here and we see it is not going anywhere. We have no hotel booked here, and I must go home for work. This is awful. I know the French workers are angry, but I am angry too.”

Public buses to and from the Paris airports were operating a normal schedule, the Paris transport operator, RATP, said. But those seeking to get to the airports by rail were facing significant delays. On the train line that runs from central Paris to the two main airports of Roissy-Charles de Gaulle and Orly, just 50 percent of trains were operating, and platforms and train cars were packed with people and luggage.

Taxis were running, although streets on the city’s Left Bank, especially the areas along the main protest route near Place d’Italie, Montparnasse and the Esplanade des Invalides were blocked by police officials for most of the day Tuesday in anticipation of tens of thousands of marchers in the afternoon.

Tourists planning to rent cars in France on arrival should be aware that shortages of gasoline — due to a weeklong strike by refinery workers — could make filling up their tanks difficult. Unions and associations representing independent fuel suppliers estimated late Monday that more than 2,500 gas stations, out of a total of 12,500 across the country, were running dry. Those groups could not be reached immediately for projections on Tuesday.

According to news reports, the areas most affected by the gasoline shortages included the Paris region, most of the north, Strasbourg in the east, much of western France and around the cities of Lyon, Clermont-Ferrand and Marseille.