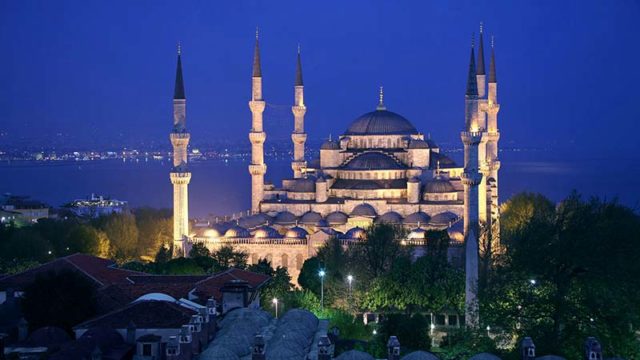 One of Istanbul’s most luxurious and iconic hotels, the legendary Pera Palace, is located in the Beyoglu district of the city, formerly known as Pera or Little Europe. The hotel was purposely built to accommodate the rich and famous passengers of the Orient Express, a luxury train service that ran from Paris to Istanbul from 1883 to 1977. Many other routes exist to this day and once a year, in August, the original route is reestablished.

As there was no appropriate accommodation in Istanbul for the kind of passengers that traveled on the Orient Express, the Pera Palace was built with the latest luxuries of the time and opened its doors with a grand ball in 1885.

The hotel is built in the neoclassical style with art deco features in the facades, whereas the interior shows many more oriental details in common with the taste for everything exotic and oriental of the time. It was also the reason why so many passengers traveled to Istanbul and what they generally perceived as “the east.” The Pera Palace is not only a protected historical building but also a museum. Countless celebrities, actors, writers, and politicians have at one time or another been guests in the hotel and left their stories and anecdotes.

The Pera Palace was the first building, with the exception of the Sultan’s Palace, to have electricity, hot running water, and an electric lift, which can still be admired and used in the sumptuous lobby. The hotel underwent 4 years of painstaking renovations and reopened in renewed splendor in 2010. It has always been at the forefront of fashionable events and the first-ever fashion show in Istanbul was held at the Pera Palace in 1926. It’s still an acclaimed venue for functions such as weddings and the beautiful patisserie is a meeting point for Istanbul’s “ladies who lunch.” The splendid views over the Golden Horn from the wrought-iron balconies and terraces adjacent to the café and library add to the charm of the Pera Palace.

In 2018, Istanbul’s gigantic new airport, located on the European side of the city, opened. The best way to reach the Pera Palace is by istanbul airport taxi. It takes approximately 40 minutes but can be much longer depending on traffic which is heavy in Istanbul. The hotel also provides a pick-up service on request.

Acclaimed British crime novelist Agatha Christie was a frequent passenger on the Orient Express and a guest in the Pera Palace. Her favorite room in the hotel was 411. You can stay there, too, and experience the aura of a master of suspense. It is rumored that her novel Murder on the Orient Express was written in this room. The original furniture is there, her books are on the shelves, facsimiles of manuscripts hang framed on the walls and a copy of the typewriter sits on her desk together with her favorite tea set. But, there is still another mystery to the room.

In 1926, Agatha disappeared for 11 days and it could never be explained what had happened to her. A medium by the name of Tamara Rand from Los Angeles organized a séance and gave clear instructions that under the floorboards of room 411 a key would be found that would open a box with a diary inside where Agatha had written down where she had been. Actually, a rusty key was found where she indicated, but no box and no notebook. Maybe you can go hunting if you stay in Agatha’s room.