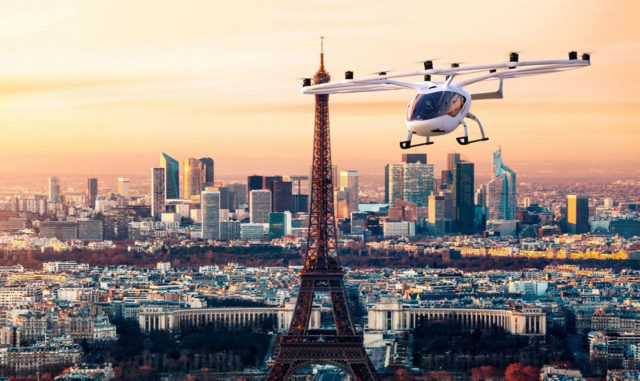 The tests of the use of flying passenger vehicles in the French capital during the upcoming Olympic Games of 2024 begin in order to relieve congestion on the city’s streets at that time and beyond.

The pandemic may be a potential problem for the smooth running of the 2024 Olympic Games to be held in Paris, but the city authorities have a definite problem ahead of them to solve if all goes well and the games are held without travel or other restrictions.

That is the traffic on the streets of the French capital which is heavy anyway and will be unimaginably burdened by the millions of visitors expected in the city during the games. As T_HQ reports in an article, one solution being promoted by the French government is the use of flying taxis during the Olympics.

To this end, trials will begin immediately in which most if not all the companies that manufacture flying vehicles intended to transport passengers over short distances will take part.

The aircraft in question are mainly electric vertical take-off/landing aircraft. Various models of such aircraft have been presented in recent years, some autonomous and others with a pilot.

These aircraft carry a small number of passengers (from two to 6-7 people) within urban areas, thus acting as flying taxis. In fact, each new model presented has an increasing degree of autonomy and is not limited to flights within the city limits but can also fly to and from the city over distances of several hundred kilometres. The routes The project is organised by Aeroports de Paris, which manages the major international airports in Paris. Trials will begin in the coming weeks at the Pontoise-Cormeilles-en-Vexin air facility, 60 km from Paris.

The tests will be organised in such a way as to determine whether passenger transport within Paris can be carried out safely and efficiently at altitudes below 300 metres, which is an unused and untested flight limit.

One route of the flying paris airport taxi will be to take passengers from Charles de Gaulle paris airport and Le Bourget airports to Paris and the other will connect the city with two of its south-western suburbs.

Of course, there may be other points in the future where passengers will be transported by air taxi to and from the French capital. The French government will support the project of using flying taxis at the Olympic Games and has already approved a sum of EUR 25 million in this direction. Indeed, if their use at the Games proves successful, France will certainly give serious consideration to continuing and extending the use of these vehicles as an efficient and above all environmentally friendly solution for urban residents.