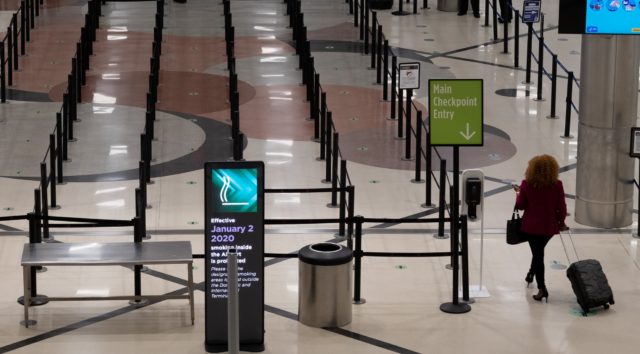 Why do hundreds of planes with few or no passengers other than the crew members fly through the EU skies every day, polluting the environment for no reason?

The scene, as reported by the correspondent of the Italian newspaper La Repubblica: ‘at Charles de Gaulle airport in Paris, and amsterdam airport the flight attendants of the German airline Lufthansa are boarding the aircraft that will fly to Frankfurt.

With their dark blue uniforms impeccably pressed and their hats securely fastened on their heads, they patiently place a red rose in each seat on the aircraft. Too bad no one else is going to board this flight on January 5, 2022. Not a single passenger. But the flight will be operated as normal by Lufthansa which, together with other European carriers, sends hundreds of ‘ghost flights’ into the skies every day.”

All this at a time when the European Commission has committed itself, through the European Green Deal, to reducing greenhouse gas emissions from the transport sector by 90% by 2050.

Who is to blame for these flights with few or no passengers, with only crew members, which unnecessarily burden the environment in the midst of a climate crisis? The so-called ‘slots’, airport slots, the rights to take off or land aircraft at certain times of the day at an airport. Slots at busy airports are a valuable asset for airlines; they can change hands for tens of millions of euros. However, they cannot be exploited by the airlines in an uncontrolled manner.

Under the EU Regulation on available slots (EEC 95/93), they are subject to the rule of forfeiture in case of non-use and are obliged to use 80% of the slots allocated to them, otherwise they risk losing their right to them for future periods.

The European regulations make sense. For decades, historical airlines have had their hands on very convenient slots at all the major airports on the European continent. They were thus automatically at an advantage compared to newer airlines, especially low-cost airlines. Hence the ‘use it or lose it’ rule.

But then the pandemic struck and things changed. Due to the impact of Covid-19 on the international and European airline industry and in order to avoid airlines being hit even harder, the Commission suspended the 80/20 rule in March 2020. With the situation improving in 2021, it set last March the obligation to use slots for air carriers at 50%. In mid-December, it announced a gradual increase of this limit, from 50% to 64%, between March and October. Negotiations will start in the coming weeks for the following period, from October onwards. The current 50%, however, has ended up in a strange way making allies in the same camp of airlines and anti-climate change activists.

It all started with an interview at the end of December with the German newspaper Frankfurter Allgemeine Zeitung by Carsten Sport, CEO of Lufthansa – a group that includes, in addition to the airline of the same name, Brussels Airways, Austrian Airways, Eurowings and Swiss. Between January and March, said Sport, Lufthansa would like to cut 33,000 flights, since demand is low due to the Omicron variant as well: but it will be forced to fly 18,000 aircraft without passengers because the EU obliges it to do so.

“While in almost all other parts of the world you find climate-respecting exemption rules in the midst of a pandemic, the EU does not allow it in the same way,” denounced Sport. “Brussels’ regulations are the exact opposite of what the Commission wants to achieve with its “Fit for 55? programme,” he added, referring to the EU’s green transition plan.

A few days after the Lufthansa CEO’s statements, it was reported that Brussels Airways alone will operate a total of 3,000 “redundant” flights, with few or no passengers, in order to maintain their airport slots. “The EU is undoubtedly in a climate emergency,” tweeted celebrity activist Greta Tunberg, relaying the story. The immediate intervention of the Commission had meanwhile been called for by French environmentalist MEP and chair of the European Parliament’s transport and tourism committee, Carima Deli, who described the situation as an “ecological as well as economic absurdity”.

“It seems that the fact that we are facing a serious climate crisis and that flying is the fastest way to bake the planet has not yet been grasped by policy makers and airlines,” the activist organisation Stay Grounded commented for its part. “If they had, flights without passengers would not be allowed,” she added. Earlier this month, Belgian Deputy Prime Minister and Mobility Minister Georges Gilquinet sent a letter for the second time in the last six months to the European Transport Minister, Adina Valjean, calling for a further reduction in the 50% time slot obligation, calling it an “economic, ecological and social absurdity”.

According to the Financial Times, which obtained access to the letter in question, Gilquinet calls for “swift action” to lower the 50% limit and provide “new exemption possibilities (for airlines) … at least for the 2021-2022 winter season and the summer of 2022 and until a way out of this crisis of the crown jewel is confirmed”.

For now, however, the EU is resisting the pressure. “The global reduction in consumer demand due to the Covid-19 pandemic is already reflected in the very low exploitation rate of 50% compared to the usual exploitation rule of 80%,” said Commission spokesman Daniel Ferry during a press conference on 5 January. “This rate, as well as the exceptions to the rules, offer airlines the protection they need in terms of their slots,” he added.

The rules “give airlines the necessary flexibility to prevent empty flights,” European transport commissioner Antina Valjean told the Financial Times. She pointed out that according to the figures, air traffic this winter is around 77% of pre-pandemic levels and is close to the 79% estimate predicted for the beginning of the year. “While we should remain cautious, this may suggest that the impact of the fourth wave and Omicron variant on air travel may not be as negative and long-lasting as we had initially feared,” Valean noted.

Until time shows all this, activists are making efforts to calculate the exact environmental costs of the thousands of “ghost flights” expected this winter in Europe’s skies. As Catherine Livesley, founder of the No Fly Travel Club, told Euronews, “A short-haul flight in a 737 emits around 18 tonnes of CO2 per hour – almost twice as much as the average European citizen emits in a whole year.

It seems incomprehensible to ask airlines to produce their colossal emissions just to avoid losing take-off or landing rights at certain times – even at 50% of normal capacity. Airlines and airports must prioritise finding a better solution – and they must be pressured by governments to do so.”