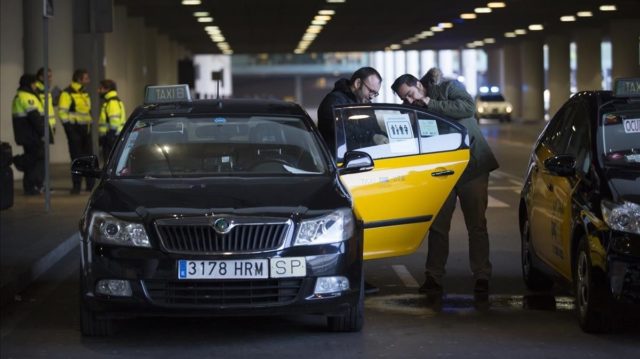 The war between Barcelona cab drivers and Uber lives this Thursday another episode with the slow march called by the Élite Taxi union that has collapsed the center of the capital throughout the morning.

Fight in transport Competition opens a sanctioning file to Élite Taxi for an alleged boycott of Uber.

The protest action is a response to the sanctioning file opened by the Autoritat Catalana de la Competència (ACCO) to Élite Taxi after the numerous complaints filed by Uber.

The march has started at 9.30 am at Plaça d’Espanya, on the Tarragona side of the street, and is scheduled to end at the Parlament de Catalunya, in Ciutadella Park.

Fight in transport New pulse of the cab in Barcelona: cameras in the car or boycott the Mobile World Congress.

In its Twitter account, Élite Taxi ensures that, in addition to drivers from Barcelona, a group of cab drivers from Madrid has moved to the city to support them in their pulse with Uber and join the march.

“Today we went out to mobilize for freedom of expression. Élite is a loudspeaker for cab drivers, and we will not stop shouting against the VTC (vehicles for hire with driver) lobbies, nor will we stop raising awareness about the misery of the ‘uberization’ of the cab through platforms like Uber,” adds the organization in this social network.

The cab drivers’ demonstration is affecting for the moment the bus lines that circulate in the area of Tarragona street, Plaça Espanya and Gran Via de les Corts Catalanes, as reported by TMB.

The ACCO has opened a sanctioning file to both Élite Taxi Barcelona, Taxi Project 2.0 and Barcelona airport taxi for possible anti-competitive conduct that would include acts of boycott, aggressive and denigrating practices to try to get cab drivers in the metropolitan area not to adhere to Uber.

The fleet of electric cabs in Spain is multiplying, the Tesla Model 3 continues to be the undisputed king.