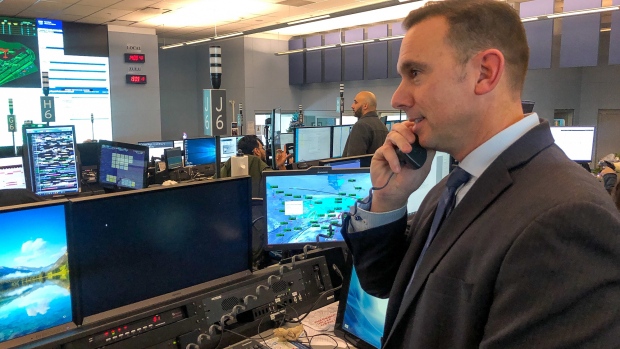 The holidays are one the busiest travel times of the year as many people are trying to catch flights to spend time with their family and friends, but not everyone gets that pleasure.

The countless people working at Toronto Airport are giving up time with their families to make sure things run in order for those flying.

“It is always a challenge for families and friends when we have to go to work during family events that we would like to be at home for,” the airport’s duty manager Wayne Finkle told CTV News Toronto.

When arriving at Toronto Pearson Airport, people are first assisted by customer service agents, who help people to check-in and get their baggage on its way to the aircraft.

“It’s nice to see the passengers come through,” said Sam Arrigo, who is the manager of maintenance at the airport.

“We can bring a little joy during the holiday season to people that may not have seen family members for a long time.”

There are many people working behind to the scenes too.

Each flight may have dozens of people involved in its operation, including ground crews, grooming and catering staff, gate agents, flight planners, maintenance personnel, flight crews and the list goes on.

During winter operations snow clearing and icing staff work tirelessly to ensure the safe departure and arrival of flights.

“For every aircraft that you see out there, there’s many hands, many people, many minds that are working to make sure a smooth operation is followed,” Hassan Khan, the manager toronto airport of operations, said.

Movement of aircraft around the terminals is handled by staff at the apron control tower located above Terminal 1.

Working along with the resource management unit, they find parking for approximately 550 aircraft daily.

Before flights can even depart, aircraft maintenance engineers make sure the planes are ready and safe to fly.

“I’m here to fix the planes, make sure they are ready to go and I don’t mind working Christmas at all,” Jason Stanley, an aircraft maintenance engineer said.

Amsterdam Airport Schiphol briefly closed due to a power cut

How to get around in Rome