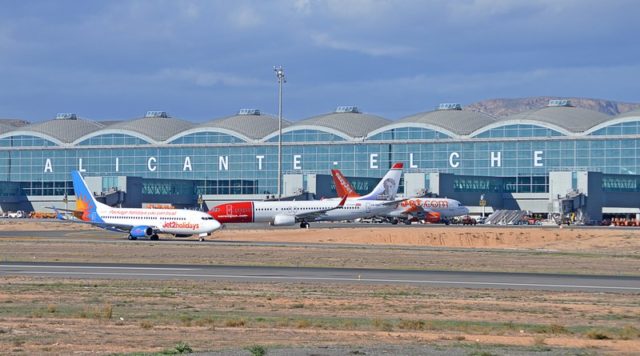 ALICANTE officials turned away 40 passengers when they arrived at the Alicante airport because of Brexit residency confusion.

Forty Britons were turned around by Spanish border officials as they arrived at Alicante airport on Monday.

The border officials sent dozens of Britons back to Manchester, without their luggage, on the same plane despite them having post-Brexit residency.

The passengers were sent home and left angry and confused as they were told by the UK government that paperwork proving successful residency applications should be sufficient enough to enter Spain.

The immigration officials in Alicante had written to the passengers asking them to collect their TIE cards or residency permits.

A 47-year-old offshore worker from Manchester, Stuart Miller, said that the situation was “absolutely diabolical” and asked: “What more proof do you need of residency?”

Ryanair airport staff in the UK had approved the passengers’ departure, however, the Britons were surprised to see a sign at the Spanish terminal that said “NO TIE CARD, NO ENTRY.”

The new TIE system was introduced after the Brexit withdrawal on December 31, 2020.

Miller said the passengers’ “fury” had been escalated when they saw that armed police, as well as the border agents, were also patrolling the checkpoint.

Those who had been refused entry into Spain had to get back on board the plane they had just arrived on, amongst other passengers making a one-way trip from Alicante.

Not only was the flight then delayed, but the returning passengers were also then informed that their hold luggage would not be sent back to Manchester until April 2.

Miller said: “There was no advice, no help and – to be fair – no good reason for us being turned back at Alicante.”

Mr Miller’s wife, Caz, warned other travellers: “Whatever paperwork you have with you, and whoever tells you that you’re okay to travel, be prepared to be carted back on to the plane and sent back.

“The most confusing thing is the double-standards. I think the airport policy depends on nothing more than the mood of the officials at the border.”

Spain was only allowing people who could prove residency in Spain to enter from Britain due to Covid restrictions at the time.

The UK government have said that Spanish authorities have “formally confirmed” people travelling with the relevant documents to prove residence in Spain should be enough to enter.

A spokesperson at the British Embassy in Madrid said they had been made aware that travellers had come up against issues at Alicante-Elche airport.

The spokesperson said: “When making plans to travel from the UK to Spain, a UK national must make sure that they meet both the requirements to leave the UK and those to enter Spain, bearing in mind that they are not the same.

“Until 6pm on March 30 only those who are legally resident or have sufficient documentation to prove residency [were] allowed to enter Spain.”

From March 31, only those who have Spanish residence or their travel is considered essential will be allowed to enter Spain.