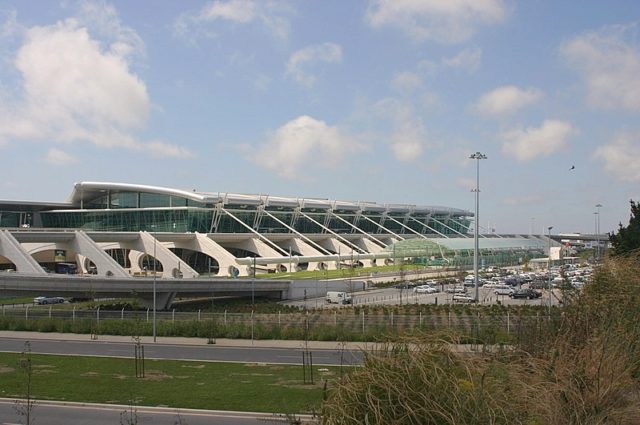 The Francisco Sá Carneiro Airport in Oporto (IATA: OPO, OACI: LPPR), also known as Oporto Airport or Pedras Rubras Airport, is located approximately 12 kilometres north of the city centre of Oporto (Portugal). It is the largest airport in terms of extension and traffic in the northwestern Peninsula and the second busiest in Portugal after Lisbon Airport.12

It was inaugurated in 1945 as Pedras Rubras Airport. Until then, the city of Porto airport was served, in terms of air transport, by the aerodrome of Espinho, built in 1935 by the Military Aeronautics.

The airport was inaugurated on 3 December 1945 with a flight from Lisbon by an aircraft of the Companhia de Transportes Aéreos.The first international flight took place in 1956 and four years later a regular flight service to London was started.

In 1975, as demand for the airport grew, the runway was extended to 3480 metres. A cargo terminal was opened in the mid-1980s. In 1990, a new terminal was inaugurated[4] with a capacity for 3 million passengers per year, and the name of the facilities changed from Pedras Rubras Airport to Francisco Sá Carneiro AirportIn this way, the Prime Minister Francisco Sá Carneiro, who died on 4th December 1980 in a plane crash in Lisbon while travelling precisely to Pedras Rubras, was honoured. In 2000, with the rapid development and increase in passenger traffic, the airport reached a situation very close to saturation, which led ANA to decide on an ambitious development project. Thus the ASC 2000 plan was drawn up as a guiding framework for all future intervention. This plan included the construction of a new access viaduct, new car parks, a new terminal with nine aircraft access gates, new taxiways, new aircraft parking positions and the remodelling of the cargo terminal. The airport was designed to be easily expandable. Thus, in response to the increase in passenger numbers, the airport will see its capacity increase from 12 to 15 million passengers/year and from 15 to 20 million passengers/year in the future.

It is currently the best airport in Portugal in terms of terminal space. In terms of air freight and passenger movements, it is the second largest in Portugal (ahead of Faro and behind Lisbon). This modern airport has witnessed a large increase in passengers and flights, and its destinations are also increasing, mainly at European level thanks to the various low cost airlines, namely Ryanair (which may soon overtake TAP Air Portugal in passenger numbers). On July 4, 2009, Ryanair announced the opening of its 33rd base at Francisco Sá Carneiro Airport, in an investment of more than US$140 million, making history as the first foreign company to “establish itself” in this infrastructure with two permanent aircraft… Ryanair connected, for the first time, Porto to Faro in a regular and direct way, on 26 October 2009. On 14 June 2010 Ryanair announced the purchase of the third aircraft for the Oporto base as well as the creation of seven new routes: Barcelona El Prat, Bologna, Bremen, Maastricht, Marrakesh, Munich West (Memmingen) and Valencia. On 2 July 2019, Emirates started a regular flight service between Porto and Dubai, four times a week, opening doors to Asia and Australia.