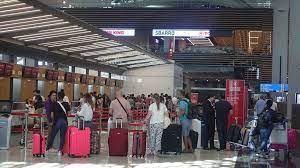 Passengers of Syrian nationality who wanted to go to Germany from Istanbul Airport with a fake passport were caught. It turned out that the fake passport belonged to a diplomat working at the US Consulate in Beirut, and the diplomat sold it to the passenger for 10 thousand dollars. While the Syrian national was released, the US diplomat was arrested.

R.S., a Syrian national, arrived at Istanbul Airport to go to Germany. Passing through the passport control point with his own passport, the Syrian passenger met with D.J.K, who works as a diplomat in the US Consulate in Beirut, in the cleared hall. The two passengers, who talked for a while in the passenger waiting room, then entered a toilet in the nearby area. Here, the US diplomat handed over his personal passport to the Syrian passenger for 10 thousand dollars.

While the Syrian, who received the passport, was waiting in the passenger waiting room for a while, the US diplomat left there.

THEY CHANGED THEIR DRESSES TO AVOID CAUGHT

The Syrian passenger, who was caught in the security camera of the Istanbul Airport Branch Office teams, waited there for a while. Police teams came to the scene and checked the passenger’s passport. Meanwhile, R.S. began to flee the scene. The duo, who met at a point at the airport, changed their clothes to avoid being caught by the police. These moments were followed by security cameras.

Two passengers, whose locations were detected by security cameras, were caught by the police. During the searches, the US diplomat’s diplomatic passport and 10 thousand dollars in the envelope were seized. Syrian passenger R.S. and US diplomat D.J.K, who were caught trying to exit the country with a fake passport, were referred to the judicial authorities.