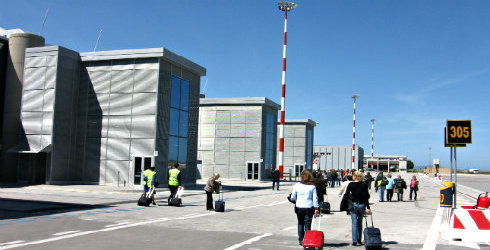 Airgest: “Trapani’s Airport” among the most searched word on-line
Trapani, Italy – In the meanwhile, in the Easter week-end, over 11,000 passengers will pass through it

(WAPA) – They will be just a few more than 11,200 the passengers that from today, Good Friday, and the Easter’s Sunday, will land and take-off from “Vincenzo Florio” airport of Trapani-Birgi with 40 daily movements (20 landings and 20 take-offs). The data, obtained from booking and on-line check-in number, attests a full and satisfying activity of the airport, despite influenced by the reduced activity for the re-routing of some flights on the close airport of Palermo due to the necessary increase of the military activities of the 37th Wing’s base following the Libyan crisis.

The other positive figure is from the web: in the last 12 months, Trapani’s airport has become the “Most searched” airport of Sicily. Until some years ago, the search of the term “Trapani airport” had been scarcely used, then between 2008 and 2009, its use on-line increased significantly, reaching and surpassing the terms “Palermo airport” and “Catania airport“. Palermo and Catania, anyway, keep being among the most travelled in Sicily, with many more passengers than Trapani.

Airports in Istanbul host 49% more travelers than in 2020