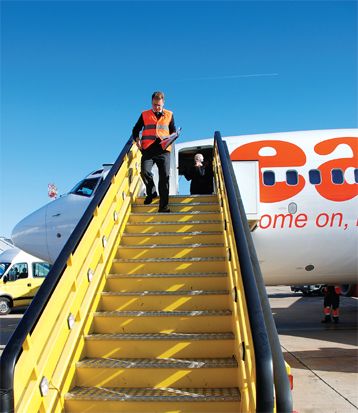 Following months of speculation, easyJet announced this week that a deal had been reached with airport management company ANA to establish Lisbon Airport as the British low-cost airline’s first Portuguese base; the new hub was officially inaugurated on Monday this week, celebrating an investment of €300 million that will create around 2,000 direct and indirect jobs and increase the number of passengers by one million per year.

During a press conference easyJet Chief Executive Carolyn McCall announced that from winter 2011, ten new routes would be added to the 15 routes that the airline currently operates from Lisbon.

The new destinations, she said, were in the process of being selected.

Despite its hefty investment in Lisbon, easyJet has benefited from financial support and incentives to help establish its Portela base.

Minister for Public Works, Transport and Communications António Mendonça said, “The airline will receive various types of financial support relating to the number of passengers [it carries] as part of the Initiative. PT programme, a fund for developing routes sponsored by ANA, the Portuguese Tourism Board, and the Lisbon Tourism Association.”

Such incentives can range between three and five euros per passenger.

ANA has also agreed to lower its airport taxes to accommodate the airline, whose flights will depart from Lisbon’s Terminal 2 and arrive at Terminal 1.

Terminal 2 is, at present, used exclusively for domestic flights though ANA’s plans are to eventually convert the infra-structure into a ‘low-cost’ terminal.

During Monday’s ceremony a brand new easyJet A-319 aircraft was christened ‘Pride of Lisbon’ by Carolyn McCall and the Prime Minister, “as a symbol of easyJet’s commitment to the market”.

Initially three aircraft will be stationed at Portela, which should be steadily increased to seven.

According to a statement on easyJet’s website, Lisbon was selected from an initial list of 57 other European cities because of its “market potential”.

The Portuguese capital has recently scooped a plethora of awards establishing its status as one of Europe’s most appealing destinations.

Amongst others accolades Lisbon was recently crowned ‘Europe’s Leading City Break Destination’ at this year’s ‘World Travel Awards (WTA), which are known in the industry as the ‘Oscars’ of the travel. It is a title the city scooped for the second consecutive year, meanwhile easyJet was donned the title of ‘Europe’s Leading Low-Cost Airline’.

Carolyn McCall said “We are making it easier to visit this beautiful country”.

“As one of Europe’s most attractive capital cities, Lisbon already attracts 3.6 million tourists and four million business travellers a year. The increase in easyJet aircraft based in Lisbon will stimulate demand and contribute to visitor numbers by over one million passengers a year, with clear benefits to the Portuguese economy”.

“We also look forward to giving the people of Portugal the opportunity to fly to new beach and city destinations at low-fares”, she added.

Paulo Campos Secretary of State of Public Works and Communications said: “The opening of the easyJet aircraft base is a focus on the development of the air transportation sector, contributing positively to the Portuguese economy.”

Of the 2,000 jobs that the deal has created, between 100 and 150 will be direct employment opportunities.

easyJet has been operating in Portugal since 1999 and currently flies from four Portuguese airports – Lisbon, Porto, Faro and Funchal – carrying more than 3.4 million passengers a year to Portugal.

Meanwhile, Irish low-cost counterpart Ryanair recently confirmed they were also in negotiations with Lisbon to create a third Portuguese base there. Two weeks ago it emerged that both easyJet and Ryanair were vying to set up a base at Portela.

At the time Ryanair spokesperson Daniel de Carvalho told The Portugal News “Lisbon is still more expensive than we would like”, but confirmed “we are in talks about Lisbon indeed, but [we] need to see a) a better price linked to strong traffic increase and b) better operational accommodation of our needs as is done in Faro and Oporto”.

Following news of easyJet sealing a deal with Portela, this week a Ryanair spokesperson told The Portugal News “easyjet’s high fares are of no concern to Ryanair. We continue talking with ANA about the possibility of bringing Europe’s lowest fares to Lisbon.”

Ryanair presently has two bases in Portugal, in Oporto (northern Portugal) and Faro (the Algarve), the latter costing the company in excess of US$500 million (approximately €360 million) to establish. Carrie-Marie Bratley