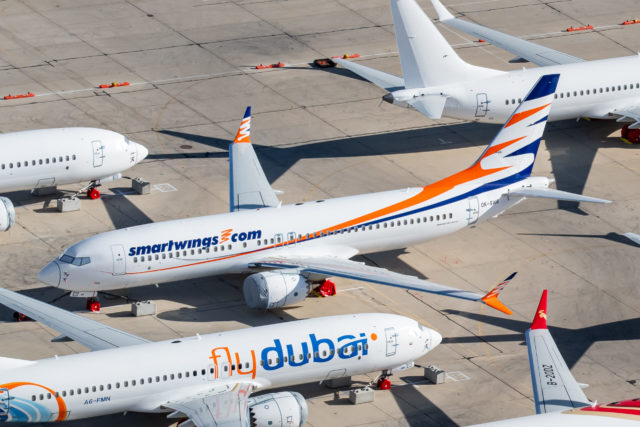 It seems the first intra-European Boeing 737 MAX revenue service following the plane’s ungrounding by the EASA late last month will be operated by Czech airline Smartwings. The carrier has scheduled one of its 737 MAX 8 planes for a flight from Prague airport to PMI Palma airport de Mallorca on February 25th – beating Norwegian Air to it by five days.

All MAXs back in service for summer

Czech low-cost leisure airline Smartwings looks to be the first European carrier to bring back the Boeing 737 MAX into scheduled commercial service. According to information from Routesonline, Smartwings plans to fly the MAX on February 25th on a route from Prague (PRG Airport) in the Czech Republic to Palma de Mallorca (PMI) in Spain.

The first European MAX flight since the EASA ungrounded the type on January 27th, will take off from PRG nearly a month later at 18:05 and arrive at PMI by 20:35, the same day. The plane will depart again at 21:20.

Smartwings currently flies twice weekly to Palma de Mallorca from its base at Prague’s Vaclav Havel Airport. While the same flight a week later is scheduled to be operated by a Boeing 737-800, Smartwings has also scheduled a flight on the same route with the MAX for February 28th. The Sunday flight operates on the same timetable as Thursday’s.

A spokesperson for Smartwings told Simple Flying that, “Smartwings follows EASA requirements for Boeing 737 MAX returning back into service. Our absolute priority is the passengers’ safety.”

They also shared that the airline is planning on bringing all seven MAXs back step by step before the summer season. Smartwings plans to deploy the aircraft on routes to the Canary Islands, Madeira, the United Arab Emirates, Oman, and Cape Verde, among others.

Expecting a fleet of nearly 40 MAXs

Smartwings has seven 737 MAX 8 aircraft in its fleet. It also has orders for 32 more, which are set to be delivered over the coming four years. Meanwhile, it only had the chance to fly the plane for a little over a year. Its first MAX was delivered in January 2018, and the plane was grounded in March 2019 following the tragic Lion Air and Ethiopian Airlines accidents.

Simple Flying has reached out to Smartwings for a comment on the decision to bring the MAX back into service and the process required to do so. This article will be updated when a response is received.

Another European airline, Norwegian, has scheduled two 737 MAX flights for March 1st. The beleaguered budget carrier will operate both Oslo Gardemoen (OSL) to Stockholm Arlanda (ARN) and OSL to Hamburg (HAM) on the same day.

The airline has also scheduled the MAX on services from Oslo to Billund (BLL), Gdansk (GDN) and Krakow (KRK), Munich (MUN), Paris Charles de Gaulle (CDG), and from Stockholm domestically to Umeå (UME) and Copenhagen (CPH) in Denmark. However, the operations of these routes are all dependent on current travel restrictions.

Norwegian has scheduled the MAX for service from March 1st.

A third European carrier has also put the MAX back on its schedule. Starting on March 8th, Icelandair has scheduled no less than 13 routes with the Boeing 737 MAX. These include Berlin (BER), New York Newark (NWR), and London Gatwick (LGW). Meanwhile, as with Norwegian’s planned network expansion, these are also subject to change.

Would you fly on the 737 MAX right away? If not, how much time will have to pass without incident for you to be convinced of its safety? Tell us about it in the comments.