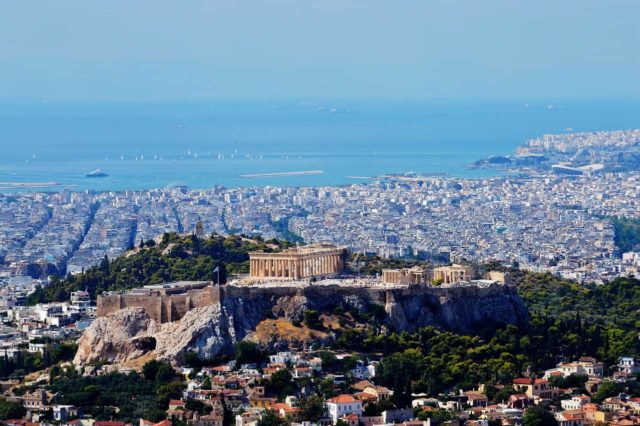 Athens and Santorini been named one of the “most instagrammable” places in the world.

The list was drawn up by Big 7 Travel, after it analysed Instagram hashtags for destinations around the world, asked the 600,000 people that follow its food and travel Instagram accounts for their opinions and considered the thoughts of its editorial team.

“As one of the world’s most sought after tourist destinations, it should come as no surprise that Athens is mega Instagrammable,” the website says.

“This ancient city camera-ready at every turn with its crumbling ruins, world-class museums and endless winding streets.”

The top 10 ‘Most Instagrammable places in the world’:

“Whether you are looking for that perfect shot in front of the sacred hill of Acropolis or aim to capture the delicious flavours of Greek street food, Athens has you in spades.”

Santorini ranks in 16th position, with the survey commenting: “A beautiful place to visit any time of the year, Santorini is made up of its surrounding islands. White sandy beaches, whitewashed stone walls, ancient temples and vibrant food and flowers make it ideal for photography lovers.”

Something that is unique to Greece are the Evzones and the Changing of the Guard at Syntagma Square, Athens which occurs every day, every hour on the hour.

The Presidential Guards, Evzones, guard the Tomb of the Unknown Soldier in front of the Hellenic Parliament 24/7. They stand proudly in perfect stillness, both motionless and expressionless, regardless of weather conditions; whether it’s a rainy winters night or the hottest summer day, you are guaranteed to catch them in action.

Evzones are an elite unit of the Greek army and it is the highest honour for a Greek Guard to be selected as an Evzone. The guards are handpicked according to their height (they must be a minimum of 1.9 meters), in excellent physical condition, they must have stamina and are disciplined and proud to serve their beloved country.

The Presidential Guard are the epitome of bravery and freedom, honouring the heroes thousands of years on, who fought and sacrificed for the land on which they stand on.

Lycabettus Hill is a must see in Athens

Climbing up to the top is definitely worth the 360° views of Athens! It takes your breath away.

The view from Lycabettus Hill is best enjoyed at sunset whilst waiting for the lights of the Acropolis, Temple of Olympian Zeus, Panathenaic Stadium and Ancient Agora to come on.

You will also be reminded that Athens is surrounded by sea with spectacular views across the Aegean.

This spot is popular to watch the sunset, we recommend getting there early if you want the best view.
Explore the suburb of Kolonaki before or after you visit Lycabettus Hill.

If you decide to climb to the top by foot, wear comfortable, sturdy shoes and carry a bottle of water.
Photos don’t do Lycabettus Hill justice. You have to see it with your own eyes.
Sit down and enjoy a coffee or cool drink at Cafe Lycabettus.
Book in advance for a good spot at Orizontes restaurant.