Barcelona Airport is one of the busiest airports in Europe, located near the second largest city in Spain. The airport consists of two terminals; T1 and T2 are connected by a free shuttle bus and metro. As of February 27, 2019, the official name of the airport is Barcelona El Prat Josep Tarradellas Airport, in honor of the former president of Catalonia. 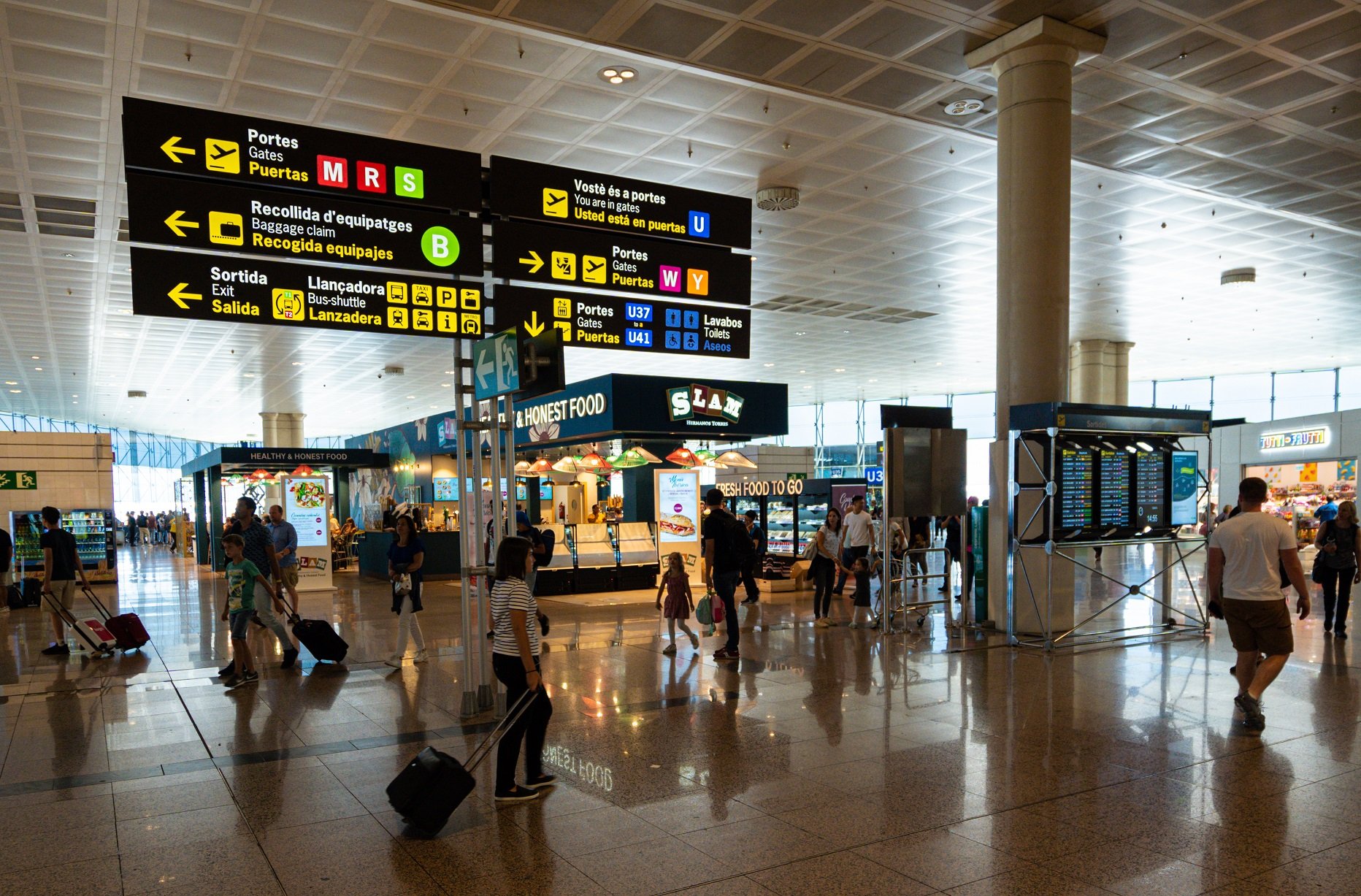 In 2019, more than 52 million passengers used the airport. The Catalan airport is home base for the Spanish airline Vueling, which carries about 35% of the total number of passengers at Barcelona Airport.

Where is Barcelona Airport located?

The airport consists of Terminal 1 and Terminal 2 (2A, 2B, 2C). The terminals are 4 kilometers apart; the free shuttle bus runs between the two terminals every 5 minutes. Barcelona Airport’s Terminal 2 is slightly closer to the city and is mainly used by low-cost airlines such as Ryanair, Transavia and easyJet. T2A is used for flights outside the Schengen area, T2B for flights within the Schengen area and T2C is used by easyJet and easyJet Switzerland.

Terminal 1 was opened in 2009. It is a large and modern facility. You can find the Departures lounge on Floor 1 (gates A, B, C) and on Floor 3 (gates D, E / non-Schengen). If you depart from gates D or E, then eat, drink and/or shop before going through security, as there is nothing on the other side. The Arrivals hall of T1 is located on Floor 0. Barcelona Airport is one of the fastest growing airports in Europe; therefore Terminal 1 Satellite will be opened in the near future.

CAR RENTAL – Want to rent a car at Barcelona Airport? Check out the options, compare prices and book a cheap car rental for your vacation in Spain – save time and money!
How far is it from Barcelona Airport to the center of Barcelona?

The location of the airport is excellent, the distance between Barcelona Airport and the center of Barcelona is only 15 kilometers (25 minutes). Terminal 1 is a little further from the city than Terminal 2.

What airlines operate flights to and from Barcelona Airport?

You can find the complete list by clicking on the following link: airlines Barcelona Airport. Are you looking for airline tickets to Barcelona? Compare on eDreams and Expedia airline prices.
How to get from Barcelona Airport to Barcelona, Costa Brava and Costa Dorada ?

TIP: Many well-known museums, sights and attractions require online reservations. If you plan to visit the Sagrada Familia and Parc Guell during your stay in Barcelona, the handy Barcelona Digital Pass (Hop-On Hop-Off bus tickets included) is highly recommended!

To go to the center of Barcelona you can take the suburban train R2 Nord of Rodalies de Catalunya. The airport station is located near Terminal 2 between section A and section B, from here the R2 Nord leaves twice an hour. During the journey the train stops at Sants (20 minutes) and Passeig de Gràcia (28 minutes) train stations located west of the city center. The price of a single ticket is 4,60 € (zone 4, free up to 3 years old). If you plan to move a lot within the city limits of Barcelona, it is best to buy a T-casual card (1 zone) for 11,35 €. This card allows you to make 10 trips and can only be used by one person. You can travel for a maximum of 75 minutes each way and transfer to the bus, metro, streetcar or train in zone 1. A T-familiar card (1 zone) can be used by several people; the price is 10,00 € for 8 trips.

Barcelona Airport is located in zone 4 of the Renfe rail network, but in zone 1 of the public transport network TMB Barcelona bus and metro. By purchasing the T-casual card or T-familiar card travelers can take advantage of this. Shuttle buses and the metro take passengers from Terminal 1 to the Terminal 2 train station, so every traveler can make use of the R2 Nord train. It is important to determine in advance where you want to get off, the last stop on this line is on the outskirts of the city in Maçanet-Massanes. For more information visit, website and timetable guide train R2 Nord.

You can also take the bus to go to the center of Barcelona, during the day you can take bus 46 (T1 and T2) and at night buses N17 (T1) and N18 (T1 and T2). These are the buses of the Barcelona public transport company TMB and should not be confused with the Aerobus shuttle service. The bus ticket costs only 2,40 €, a much cheaper rate than the one you have to pay for a ticket for the Aerobus line A1 and line A2 (5,90 €). Through GetYourGuide you can quickly and easily book tickets for the Aerobus with which you can go to the city center.

If you arrive at Terminal 1 the bus is usually faster than the train, because you don’t have to take the shuttle bus from Terminal 1 to Terminal 2 to get on the train from there. Bus 46 runs approximately every 15 minutes, the journey time to the last stop at Plaça d’Espanya is 30 minutes. You can buy individual (single) tickets from the bus driver or you can buy a T-casual card or T-familiar card at one of the vending machines if you want to use public transport more frequently during your stay in Barcelona. Plaça d’Espanya is not located in the city center (Ciutat Vella), but to the southwest. You can transfer to the metro lines L1 and L3 to get to the center of Barcelona (+ 2,40 €). More information can be found by clicking here, TMB Barcelona website and Aerobus website.

How much does a cab to and from Barcelona cost?

A trip to the center of the Catalan capital costs 30 ¤ from Terminal 2 and 35 ¤ from Terminal 1. Please note that an airport supplement (surcharge) of 4.30 ¤ applies for cab service to and from Barcelona Airport. Terminals T1, T2A, T2B and T2C have their own Barcelona airport taxi ranks in the Arrivals areas.

What car rental companies are available at Barcelona Airport?

At Barcelona Airport you can rent a car from Avis, Budget, Europcar, Hertz, Thrifty, Enterprise, Goldcar, Interrent, Record Go and Sixt. The car rental companies have an information desk in both Terminal 1 and Terminal 2B. You can only rent a car from Firefly at Terminal 2B. Through EasyTerra Car Rental you can compare the prices of all suppliers and benefit directly from the offers.
When would you like to rent a car at Barcelona Airport, book a cheap car rental!