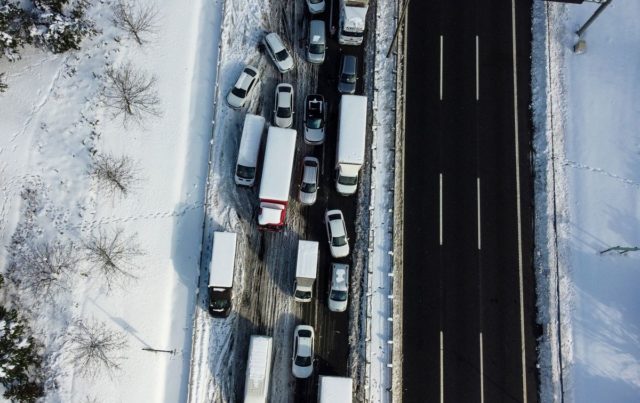 ISTANBUL/ATHENS, Jan 25 (Reuters) – Some Istanbul Airport flights resumed on Tuesday after nearly 24 hours of cancellations as heavy snowfall clogged roads and stranded thousands of people across Turkey and Greece.

In Athens, thousands were evacuated from a motorway overnight and took shelter at the city’s airport after Monday’s severe snowstorm. By Tuesday, dozens of cars were still covered in snow as ploughs tried to clear roads and anger grew among people trapped in freezing temperatures for hours. read more

“The situation is hopeless,” said Spiros Kandaras, who spent 24 hours in his car. “They should be ashamed of this mess.”

In Istanbul, the airport, among the world’s biggest, has been under a thick blanket of snow with runways and planes covered.

The snowfall began late last week and picked up over the past days in the city of 16 million people, delaying buses and ferries and prompting a ban on driving private vehicles.

“We have been here for more than 24 hours already,” said Selim Kilik, who planned to fly to Paris this week. He complained about a lack of staff and information.

An airport spokesperson said limited flights began around 1000 GMT (1.00 p.m.) after a 22-hour delay, and that scheduled flights would resume around midnight.

Turkish Airlines (THYAO.IS) earlier said it had halted all flights until 2100 GMT.

Ugurcan Guller, who was waiting for a domestic flight, said stranded passengers had problems with baggage, tickets and food at IST Istanbul Airport.

“We have been sleeping on the floor miserably since yesterday,” he said. “We call on the authorities to find a solution for us.”

Storms swept through the region from Greece and across Turkey, as well as into Syria, where snow has disrupted aid deliveries to displaced families living in tented camps. read more

In Turkey, snow carpeted the beaches of the southern resort city of Antalya for the first time in 29 years. In a rare sight, Greece’s southern Aegean islands, including Mykonos, also turned white.

A video posted on social media showed a man skiing through Istanbul’s streets, with people waving as he passed.

Governor Ali Yerlikaya took the rare step of banning private cars until 1000 GMT, while public workers were given leave through Wednesday to keep commutes to a minimum.

Buses were suspended until Wednesday and vehicles arriving from west of the city were barred.

Other footage showed trucks and cars stranded along highways in and around Istanbul. Passage across the Bosphorus Strait reopened on Tuesday, while people were evacuated from stranded vehicles, said Transport Minister Adil Karaismailoglu. read more

Across the country, about 4,600 people were left stranded on roads and elsewhere, and thousands had been placed in temporary housing, the Disaster and Emergency Authority said.

Heavy snow is rare in Athens but the city has now been hit by extreme weather for a second consecutive winter.

More than 3,500 people had been evacuated by early Tuesday, some abandoning their cars on foot, but around 1,200 cars remained stuck on the Attiki Odos, the capital’s main ring-road, government spokesperson Giannis Oikonomou said.

As temperatures fell overnight, soldiers shovelled snow and handed out food, water and blankets to drivers, some of whom were stranded in their cars for more than 10 hours.

Parts of Athens were hit by power cuts for several hours, and the grid operator said crews were working to restore electricity.