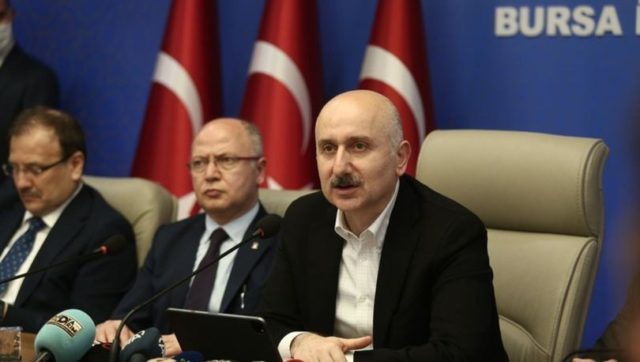 Regarding Istanbul Airport, Minister of Transport and Infrastructure Adil Karaismailolu said, “Today, Istanbul Airport is the airport with the most flights in Europe. Fortunately, we do the opposite of what this opposition says, and Turkey is developing.”

Minister of Transport and Infrastructure Adil Karaismailo?lu said, “Our people know very well those who bring the water and those who break the jug. He also sees the difference between the two mindsets very well. On the one hand, we produce projects that will carry Turkey into the future and achieve its goals with the support and will of our people, and on the other hand, those who threaten and slander those who undersign these successful projects and investors.”

Minister of Transport and Infrastructure Adil Adil Karaismailolu completed his Bursa visit with the AK Party Provincial Presidency. Adil Karaismailolu, who also made statements here, stated that they always planned one step ahead with the state’s mind. Adil Karaismailolu, “Our ultimate goal; There is the realization of ‘Holistic Development’ by supporting the national economic independence approach. For this, we continue to take steps to transform Turkey into a leader in the Middle Corridor and the largest logistics power in the world. We took our divided highway length across the country from 6,100 kilometers and increased it to 28,550 kilometers. We increased our highway length to 3,532 kilometers. We crossed impassable mountains with tunnels, valleys with bridges. We increased our bridge and viaduct length to 724 kilometers. We increased our total tunnel length from 50 kilometers to 651 kilometers by increasing 12 times. Until 2003, we renewed all of our railways, which were untouched for 150 years. We built our nation’s half-century dream High Speed Train lines. With high-speed train lines, we have elevated our country to the position of 6th in Europe and 8th in the world as High Speed Train Operator country.”

“IN EUROPE’S MOST FLIGHT AIRPORT”

Minister Adil Karaismailolu, who said that they opened the Marmaray and Baku-Tbilisi-Kars Railway line, providing an uninterrupted railway connection from Asia to Europe, said, “We made the airline the way of the people. We said, ‘There will be no place in the world that we cannot reach’; Today, we have reached 336 points in 128 countries. With Istanbul Airport, which was put into service with its huge capacity on October 29, 2018, we made our country a transfer center in international aviation and carried it to the top in global aviation. Today, Istanbul Airport is the airport with the most flights in Europe. Fortunately, we are doing the opposite of what this opposition says and Turkey is developing.”

“We aim to complete the project by the end of 2024”
Adil Karaismailolu continued his words by saying, “Although there is a railway network from Balkesir, Bandrma, Kütahya, Eskiehir and Bilecik, Bursa, which is in the middle of all these cities, has longed for the railway for years.” -We are integrating Bursa into the high-speed train network with the Bursa-Yeniehir-Osmaneli High Speed rain Line. On November 22, 2021, we started the construction work in all sections by delivering the site for the missing sections. The high-speed train line Gürsu will follow the Yeniehir route and be included in the Bursa high-speed train network by connecting to the Ankara-Istanbul HT line with the Müselles line to be built in Osmaneli. At the same time, we will reach Bal?kesir by passing through TEKNOSAB and Karacabey stations in the west of Bursa and provide a railway connection between Bursa and Bal?kesir. In our project, passenger and freight transportation will be carried out together. We aim to complete the project by the end of 2024. In the 26-year projection between 2024-2050; 4.3 billion liras from time. 585 million liras from highway maintenance and operation. With the completion of the high-speed train line, the total economic gain will be 15.4 billion liras, with 10.5 billion liras from external benefits such as air pollution, climate change, noise, cost of nature and green land, biodiversity, soil and water pollution.

“The Emek- Arabayatagi Metro line, which is currently in operation; With the extension we will make, it will cross Mudanya Boulevard and reach the high-speed train station and eventually the City Hospital and will facilitate the access of our citizens from Bursa. The two most important stops of the line are the high-speed train station and the hospital station. It will serve 327 thousand passengers daily. Integrating the Bursa-Yeniehir-Osmaneli HT line and the metro, the construction of which I just mentioned, is still underway by our Ministry, and a comfortable and punctual option will be offered for the high-speed train access of all of Bursa.”

“As you can see, we are strong in our work. However, unfortunately, we were faced with the repeated lies of the chairman of the main opposition party regarding the Bursa high-speed train line tender. Their intentions are clear; Adil Karaismailolucontinued his criticism by saying, “Let the mud horse trail remain”, “But they are very wrong. We and the nation are tired of their lies and iridescent attitudes. They make unfortunate statements at the expense of disgracing themselves in front of our beloved nation with false information that is untrue and slanderous. We gave them the answer they needed. As a matter of fact, we made the necessary explanations again in the field investigations we carried out today. The old route is 106 kilometers in total. 95 for the second tender held in 2020.

Turkish Airlines: cancels all flights to Kazakhstan until 9 January