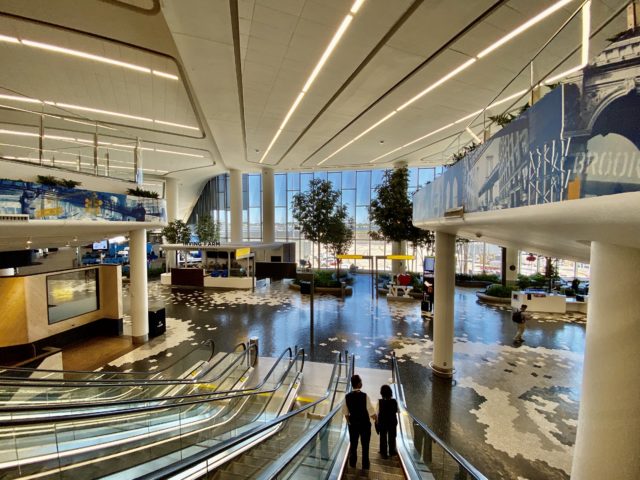 State and local officials in New York celebrated the completion of the new Central Terminal at LaGuardia Airport, the final milestone in the $4 billion project.

The completion comes three years and one month after the Eastern Concourse first opened to passengers in December 2018.

The old LaGuardia Airport was so inhospitable and decrepit that, in 2014, then Vice President Joseph Biden famously likened it to a “third world country.”

“We’ve really gone from worst to best and I love it,” the governor said at a news conference held in the last section of the terminal to open to the public, a new skybridge that connects to 17 new gates in the Western Concourse simultaneously offering a glimpse of the Manhattan skyline.

The Western Concourse itself opened in the summer of 2020.

LaGuardia Airport in New York City, named after the feisty mayor who demanded an airplane bound for New York actually land within the city’s borders (it had first stopped in Newark, New Jersey, prompting the mayor’s outcry), is one of the 20 busiest airports in the United States.

Pan Am’s inaugural flight out of LaGuardia, with a destination of Lisbon airport lis, Portugal, took place on March 31, 1940 and it was the airport’s first transatlantic flight. The airport had opened to short-haul flights the previous year as New York Municipal Airport-LaGuardia Field. It received the name LaGuardia Airport in 1953 in honor of Mayor LaGuardia.

The old Central Terminal Building, which opened in 1964, was home to ten airlines including Air Canada, American, Southwest, and United.  Later this year, the remaining sections of the 1964 structure will be demolished.

Finally, After years of mounting criticism, New York Governor Andrew Cuomo made it his mission to transform “what is now an outdated and poorly designed complex into the world-class airport New York has always deserved.”

“If I blindfolded someone and took them at 2 o’clock in the morning into the airport in Hong Kong and said ‘where do you think you are?’ They would say, ‘this must be America. This is a modern airport,’” Biden had said in 2014. “If I took him blindfolded to LaGuardia airport in New York, you must think ‘I must be in some third world country.’I’m not joking.”

Hochul said that President Biden would in fact be invited to the new LaGuardia Airport to “show him we listened.”